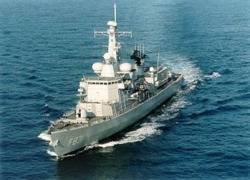 Counter-piracy task force off Horn of Africa joined by warships from Netherlands, Spain

The counter-piracy taks force sent by the European Uniion to patrol the waters off the Horn of Africa, has been joined by two additional warships. The Dutch multi-purpose frigate HNLMS Van Amstel has arrived in the area, as well as the Spanish frigate ESPS Reina Sofia.

Both ships have helicopters embarked that are capable of searching large areas of sea to look for suspect pirates.  These warships bring the total EUNAVFOR strength up to 10 vessels in preparation for any increase in pirate activity following the end of the monsoon season.