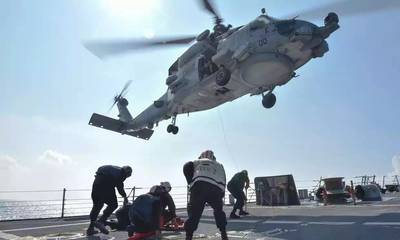 China has confirmed it will send warships to join a major US-hosted naval drill this summer, even as tension between the world’s two largest economies mounts over the South China Sea, reports Reuters.

The Naval exercise Rimpac (Rim of the Pacific ) is  the world's largest international maritime drill, held every two years in Hawaii in June and July.
The U.S. and its allies have expressed growing concern over the Asian giant’s military buildup, as well as its increasingly assertive posture in the South China Sea.
“Joining these military exercises will be beneficial to improving the Chinese navy’s ability to contend with non-traditional security threats,” Wu Qian, a spokesman of China’s Ministry of Defense, told a regular briefing.
China would send warships to participate, he said, but did not say how many or what kind.