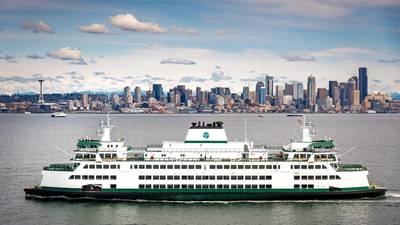 The Washington State Department of Transportation (WSDOT) will launch a competitive bid process for the construction of its next five hybrid-electric ferries after negotiations stalled with shipbuilder Vigor.

Vigor, which has built a number of existing vessels for WSDOT's Washington State Ferries (WSF), is currently finalizing designs for the new ferry class and was also lined up to build the vessels, but the shipyard and WSDOT could not agree on price and other contract terms, Patty Rubstello, Assistant Secretary, WSDOT/Ferries Division, wrote in a recent letter to WSF staff.

"Unfortunately, we cannot reach agreement with Vigor on either price or contract terms, including the appropriate assignment of risk. Vigor’s proposed terms of the contract differ significantly from those proposed by WSDOT, as does their cost estimate," Rubstello wrote on May 24. "We notified Vigor today that we are ceasing negotiations and intend to solicit competitive bids to deliver these vessels."

"We did not take this step lightly. WSDOT must approach contracts with the best interests of taxpayers, whose dollars support our transportation system, foremost in mind. As we have done on multiple other programs, we are utilizing a design-build contract, an approach that limits risk assumed by the state," Rubstello wrote.

"Vigor is now nearly complete with the functional design that will be used to build the HEOCs," Rubstello wrote. "Once completed and accepted, WSDOT will own the design and will utilize it for these new vessels."

The five vessels will be bid out as a single program to Washington shipbuilders, though other yards outside the state could potentially compete for the project if local bids come in at too high a price. State law requires that WSF ferries be built in Washington, unless all in-state bids are more than 5% higher than the state’s own project estimate. The five-vessel program, which the state estimates is worth just over $1 billion, is expected to attract national attention.

"[Washington Secretary of Transportation Roger Millar] has asked the WSF team to move forward with a request for proposal (RFP) to secure a shipbuilder for the HEOC vessels. I have instructed the team to move as quickly as possible. The solicitation and award of a new contract will result in a delay of the first vessel, but we will work to minimize schedule effects as much as possible."

WSDOT said it aims to launch the bid process this summer, targeting first ferry delivery in June 2027. Subsequent deliveries would come roughly every 14 months through late 2031.

A new hybrid-electric tugboat due for delivery by end of December 2022 will be the first of its kind to operate in Japanese waters.The vessel…