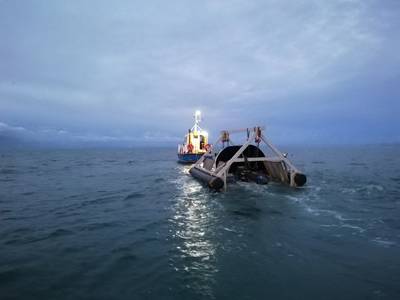 Installation of the prototype near Hanstholm © Wavepiston

With its “Film Instead of Paint” concept RENOLIT is exploring new horizons in the maritime sector, as the company now plans to enter the renewable energy market with its films. The first step has been made with the use of the flock-film RENOLIT SEAL for an innovative enterprise in Denmark, where the company Wavepiston has developed at similarly-named wave-powered energy generation project.

The idea
A steel cable is stretched between two anchored buoys. Energy collectors developed by Wavepiston are attached to this cable at intervals of five to six meters. These collectors consist of a plate and a lateral hydraulic pump. The oscillation of the waves move the plates back and forth, which in turn, pumps seawater to an onshore turbine. To achieve the greatest possible energy efficiency, substantial wave movements are needed, which experience shows are found, above all, in fishing waters.
Naturally, the Wavepiston project suffers from fouling. “Encrustation with mussels, barnacles and algae increase the weight of the plates and if they become too heavy, they sink down where the wave energy is lower” says Martin von Bülow, Wavepiston’s CTO. To protect the plates against fouling, the company invested a lot of time in researching the best anti-fouling solution. The challenge was: Most anti-fouling coatings contain toxins and biocides. “Especially for our project, these were totally unsuitable because in the fishing areas in which our units are preferably stationed, the use of all materials containing biocides is strictly prohibited” says von Bülow. RENOLIT’s films presented a good alternative; effective again biofouling and biocide-free.
To perform long-term real-life tests on our concept, a test field was set up in a fishing area off the coast from Hanstholm in Denmark. The 120-m long prototype consists of eight energy collectors with four square meter and seven square meter plates.
Two of these plates were coated with a RENOLIT film, namely RENOLIT SEAL. This film not only has excellent anti-fouling properties but also has a very special “flock-type” surface. “We expect the film’s surface structure will increase water friction and thus lead to a higher energy gain” says Sébastien Charlés, Manager of the RENOLIT Maritime Business Unit.
As part of the long-term test in Hanstholm, the efficiency of the different plates will be tested to determine if the filmed plates generate more energy that the non-filmed plates.