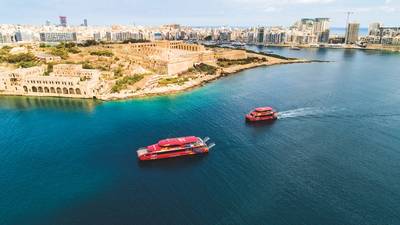 Wight Shipyard Co said it has built and delivered four ferries simultaneously from its yard in Cowes, Isle of Wight, for a Maltese tour operator.

Jo Daly, COO, WSC, said the four ferries were produced within a year, despite the restrictions and changes to working brought about by the worldwide pandemic COVID-19.

The bespoke vessels for Captain Morgan Holdings Ltd, a subsidiary of Fortina Investments Ltd, have been created to be lighter and more fuel efficient than anything that WSC has built before, the shipyard said.

WSC specializes in the build of lightweight ferries with the subsequent benefit of lower fuel burn. Meticulous attention is paid to the weight of every element of the materials and equipment used on the builds, which has led to weight reductions and fuel savings on all four of the ferries.

The two newbuild 20-meter harbor catamarans will replace existing vessels which already service the historic harbor cruise around the two natural harbors surrounding the capital city of Valletta and the three-cities.

The 20m is designed to be a slower harbor waterbus for frequent stopping in ports surrounding the sheltered waters around the capital. It is designed for optimum efficiency achieving speeds of between 8-10 knots, with a top speed of 20 knots.

The vessel’s layout provides for seated passengers on both the main and upper decks while providing excellent comfort levels in an open-plan deck arrangement. The wheelhouse main steering station is located on the second deck level for improved visibility. It can carry 197 passengers and three crew.

The two 33-meter medium speed vessels meanwhile will service a new commuter/tourist hop-on, hop-off service along the east coast of Malta as far as the island of Gozo. These ferries are also replacing a number of old existing vessels which transport commuters between the islands of Malta, Gozo and Comino.

The main aim for these vessels is to move commuters and tourists quickly in and out of different locations around the coast. While operating below 20 knots and under high speed code, they can achieve a top speed of 30 knots.

The layout of the 33m is slightly different to the 20m. The main deck features an enclosed air conditioned cabin with seating and a kiosk/bar located at the aft end of the cabin, while the open upper deck provides protection for the passengers from rain with a large overhanging roof. It can carry 298 passengers and four crew.