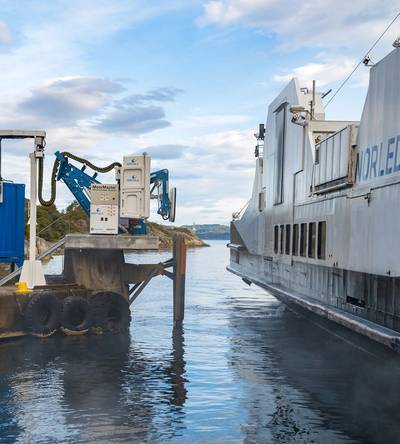 Wärtsilä's wireless charging system is the first in the world to operate successfully with a coastal ferry. (Photo: Wärtsilä)

Wärtsilä informs it has tested its automatic wireless induction charging system on a hybrid powered commercial coastal ferry, the first in the world operating with high power wireless charging capability for its batteries.

The tests were carried out in Norwegian during the end of August and early September on the 85 meter long MF Folgefonn owned by Norled, one of Norway's largest ferry operators waters.
The project, partially funded by Innovation Norway, represents a breakthrough in the evolution of plug-in electrically operated vessels, Wärtsilä said. Wireless charging eliminates the cable connection between the vessel and shore, thereby securing and facilitating safe connections and disconnections. It also reduces maintenance since wear and tear to physical connection lines is eliminated. The integrated Wärtsilä system is based on inductive power transfer and is capable of transferring more than a MW of electrical energy.
The Wärtsilä system is designed to maintain efficient power transfer at distances of 50 centimeters between the two charging plates built into the side of the vessel and the quay. According to Wärtsilä, no other wireless charging system is as powerful, or capable of maintaining the transfer of energy at such a distance.
“During recent years, wireless charging has been introduced for cars, busses and trains. We have now made this possible for marine vessels,” said Ingve Sørfonn, Senior Technical Officer E&A, Wärtsilä Marine Solutions. “The main benefits for customers are up to 20 percent more utilization of the available charging time, increased operational safety, and greater system reliability. There is an ongoing trend to equip coastal ferries with battery powered and hybrid propulsion since they are particularly affected by environmental regulatory demands. Wireless charging will, therefore, create considerable value for operators of hybrid ferries.”
Cato Esperø, Sales Director, Wärtsilä Norway, said, “For Wärtsilä, this wireless charging revolution focuses on coastal ferries, a segment of the transportation industry that is well-suited to the technology because of short stop-and-go schedules. The wireless charger is an innovative and value adding new part of our hybrid solutions offering, which we shall continue to develop further in line with the needs of our customers.”

Glosten and ABB have teamed to develop a methanol-hybrid ship assist tug design. The "SA-100" is a 100-ft. ASD harbor tug…