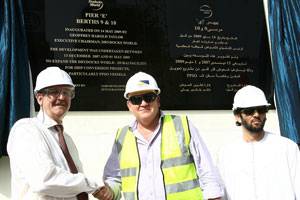 Drydocks World - Dubai, the ship repair, conversion and building subsidiary of Drydocks World, has added two new berths to its facility, significantly increasing its conversion capacity. Completed recently, Berths 9 and 10 are now fully operational and have recently accommodated the 380-metre long TI Asia, Abuzar and Spring Bow for conversion works. The announcement comes ahead of Drydocks World’s participation at Nor-Shipping 09, in Oslo, June 9th–12th, where the company’s yard capabilities in the Middle East and Southeast Asia will be highlighted.

The new FPSO Quay is located on the lee face of the main breakwater, with a total length of 668m and a dredged depth of –11m DMD (Chart Datum) over a length of 630m Each new berth is more than 59m wide and is projected to increase Drydocks World-Dubai’s Floating Production, Storage and Offloading (FPSO) conversion capacity by two vessels per year.

Bob Normand, Director of Infrastructure Development, Drydocks World, said: “We are proud to have successfully completed another expansion project at our shipyard. The two new berths will further strengthen Drydocks World-Dubai’s profile as the largest and most efficient maritime industry hub in the region. Berths 9 and 10 are capable of handling supertanker-size vessels. The main contractor for the berth design and construction was Dutco Balfour Beatty, working with subcontractors Hills & Fort and Wajdi for the mechanical and electrical works respectively. Scott Wilson Kirkpatrik designed the civil works. I congratulate the entire team including our in-house personnel that worked to achieve the completion of the berths.”

The completion of Berths 9 and 10 enable the shipyard to provide more lay-down and fabrication areas for the conversion of Very Large Crude Carriers (VLCCs) to FPSOs. FPSOs usually dock for one to two years, occupying crucial yard space for repairing of vessels. The new berths, which currently operate with three cranes provides the much-needed additional space to meet growing customer demand.

Berth 10, which is at the seaward end of the quay, became operational on March 23, 2009 with the berthing of an oil tanker now undergoing FPSO conversion. Berth 9 was completed on April 8 and is fully operational for conversion works.
The conversion of TI Asia, one of the four largest oil tankers in the world, and Abuzar are major assignments the company has taken up, reflecting its highest technical expertise and yard capability. TI Asia weighs 441,893 metric ton and can carry 3,166,353 barrels. Dubai is among the very few ports in the world that can host the mega ship, which will soon be converted into a FPSO at Drydocks World - Dubai.

Based on the development and subsequent growth of Drydocks World - Dubai, which celebrated its Silver Jubilee in 2008, Drydocks World has recently acquired four fully operational facilities; one in Singapore and three on Batam Island, Indonesia. Drydocks World-Dubai has been a winner of the prestigious British Safety Council (BSC) Sword of Honor for 5 consecutive years, and is considered to have the best Occupational Health & Safety performance in the marine industry worldwide. The same high safety and quality standards are being applied to all other facilities within the group.