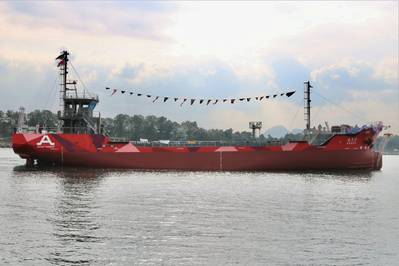 An all-electric, battery-powered tanker—said to be the world's first—has been launched at the Koa Sangyo  Co., Ltd. shipyard in Japan.

The new vessel, named Asahi, was built for Japanese shipping company Asahi Tanker Co., Ltd. and is scheduled to enter service in Tokyo Bay as a bunker fuel supply ship following completion and delivery in late March 2022. The 62-meter-long vessel has a tank capacity of 1,280 cubic meters.

The battery-powered vessel was designed by e5 Lab Inc., a consortium of leading Japanese shipping and maritime services companies set up to build infrastructure services focused on electrically powered vessels. The ship is classed by ClassNK.

Kawasaki Heavy Industries (KHI) was awarded the contract for the ship’s propulsion system and integrated Corvus Energy's 3,480 kWh Orca ESS to power the vessel. The ship features a pair of 300-kilowatt (kw) azimuth thrusters and a pair of 68-kw side thrusters.

The groundbreaking vessel is the first of two all-electric vessels to be built from the e5 Lab initiative. The second ship, which is being built by Imura Shipyard Co., Ltd. in Japan, is expected to be completed by March 2023.