On a French Lake, Mariners Learn How Not to Get Stuck in the Suez Canal 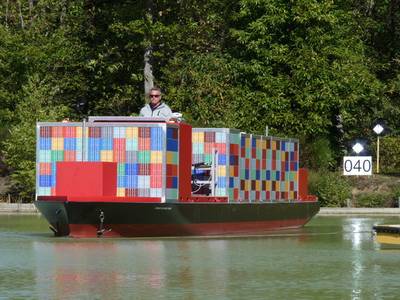 Francois Mayor nudged back on the power and made a subtle adjustment on the wheel as he coaxed his cargo vessel through a narrow point in the Suez Canal—not the Egyptian one, but a replica in the middle of a French forest.

This stretch of water was built to train ship captains and maritime pilots how to navigate the Suez Canal—a skill now in the spotlight after the Ever Given cargo ship got wedged in the Egyptian waterway last month in high winds and a sandstorm.

The channel is built to one twenty-fifth the scale of a section of the real Suez Canal. Trainees have to steer through scale models of massive container ships without getting stuck.

"It's a bit hard to recreate sandstorms," said Mayor, the managing director of the Port Revel training facility, built around a lake in eastern France. "But we have gusts of wind which will push our ship to one side or another."

During training on the mini-Suez canal, instructors simulate steering problems and engine outages to see how the trainees react.

"You have little space to maneuver. You have to be particularly focused," said Mayor.

Located in the foothills of the Alps, the Port Revel facility is designed to replicate some of the trickiest spots in global shipping.

There is also a mini-San Francisco Bay, and an imitation Port Arthur, Texas, for lessons on docking and maneuvering cruise ships and tankers in crowded ports. Under-water turbines replicate currents and waves.

Mayor said the incident with the Ever Given, which blocked the Suez canal for six days and choked global trade, may prompt shipping companies to send their staff for refresher courses.

"After each accident... we see new clients coming," said Mayor. "The cost of training at Port Revel is nothing like the cost of having a vessel like that stuck for a day."