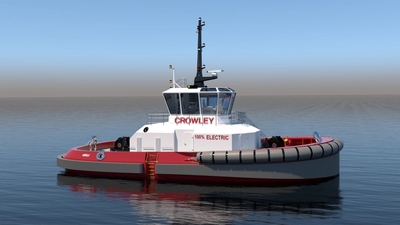 ABB said Thursday it would deliver an integrated electric propulsion system and vessel control technology for Crowley’s pioneering eWolf tug, built for sustainable and safe operations at the Port of San Diego.

It will be the first all-electric, battery-powered harbor tug ever built and operated in the United States and only the third of its kind to enter operations worldwide, ABB said.

Under a contract with Master Boat Builders, ABB is supplying the end-to-end electric propulsion system to sustain emissions-free operations in waters off the eighth-most populous city in the United States.

The solution will include a six-megawatt-hour energy storage system (ESS), allowing Crowley’s eWolf tug to achieve 70 short-tons of bollard pull emissions-free. The battery allows the tug to complete a full day of typical work before there is a need to charge.

Achieving lower operational costs on a through-life basis than an equivalent vessel running a conventional engine, the all-electric propulsion solution holds the potential to eliminate the equivalent of over 100 cars worth of CO2 pollution every year, per ABB.

Systems on board the tug will also feature products from the ABB Ability Marine Pilot family for enhancing crew safety and reducing workload.

In addition to systems integration, engineering, and automation on the newbuilding, ABB will supply the Onboard DC Grid power distribution system platform for optimized energy use.