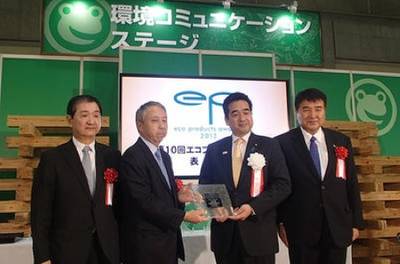 The Japanese Government's 'Minister's Award' has been presented jointly to NYK and the  Oshima Shipbuilding Co. in recognition of the NYK Group’s use of the energy-saving air-lubrication system on its vessels.

The awards ceremony was held in Tokyo at Eco-Products 2013, the largest environmental exhibition in Japan, and attended by NYK managing corporate officer Yasuo Tanaka; Iwashita Tatsurou, director and general manager of the Design Dept. at Oshima Shipbuilding; and Makoto Igarashi, president of MTI.

NYK explain that the air-lubrication system effectively reduces CO2 emissions by use of bubbles generated by air released from the bottom of the vessel to lessen the frictional resistance between a vessel's bottom and the seawater.

Moreover, in 2010 a new air-lubrication system that features a blower that provides air to the vessel bottom, thus reducing friction between the vessel bottom and the sea, was installed on two NYK Group module carriers. Subsequently a system using the vessel's scavenging air was additionally developed and installed on a new coal carrier in 2012, thus demonstrating the viability of the system for large vessels with deep drafts.

Pictured: From left, Makoto Igarashi; Yasuo Tanaka; Manabu Sakai, the parliamentary secretary for the Ministry of Land, Infrastructure and Transport; and Tatsurou Iwashita.