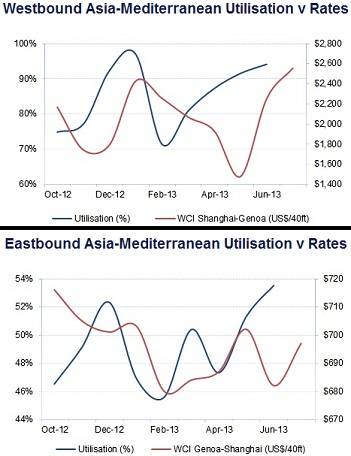 Asia/Med peak season started badly as cargo growth from Asia to the Mediterranean was poor in June, which is an ominous sign for the rest of this year’s peak season.

Containerized exports from Asia to the Mediterranean rose by only 1% between May and June, up to 415,000,000 teu, which does not auger well for the rest of the peak season. As the market is partly driven by tourism, much has to be in place before the end of August. The Eastern and Western Mediterranean regions were as poor as each other.

The result brought the second quarter’s total up to only 1,237,000 teu, which was still 7% more than in the same period last year, however. Growth in the Eastern and Western Mediterranean regions was 5% and 12% respectively. Turkey remained the shining star of the Eastern Mediterranean, despite its political difficulties, helping to counteract reported difficulties in the Black Sea.

Otherwise, countries such as France, Spain, Greece, Cyprus and Italy remained in recession, with little light appearing at the end of the tunnel. It is hard to visualize much of a mini-boom over the remainder of the peak season, therefore.

Ocean carriers reacted by only adjusting vessel capacity slightly. After falling by 1.7% in June due to 11 sailings being cancelled, down to 446,000 teu (compared to seven in May), overall vessel capacity increased by 1% in July, back up to 450,000 teu, as only eight being withdrawn. Three of these were from the G6’s ABX service to the Black Sea, however, which is being withdrawn completely at the end of August, to be replaced by a feeder service that will maintain the same port rotation in the Eastern Mediterranean (i.e. Port Said, Ashdod, Istanbul, Constanza, Odessa, Istanbul, Ashdod and back to Port Said).

The end result is that average westbound vessel utilization rose from 91.5% in May to a much more respectable 94% in June, helping to increase freight rates. In theory, July should have been just as good, with increased cargo compensating for fewer sailings cancellations.

With the ABX service running at full strength, the withdrawal of its 11 vessels averaging approximately 5,800 teu will result in overall effective westbound capacity being reduced by 5%, down to 433,489 teu/month, which will help to compensate for the usual seasonal downturn in cargo at the end of August. The Black Sea, it seems, has not been a happy hunting ground for ocean carriers this year, due to poor cargo volumes and freight rates.

Containerized exports from the Mediterranean to Asia also remained lackluster in June, reaching only 177,000 teu, compared to 178,000 teu in May. The slowdown of China’s economic miracle will have been partly to blame, as was Japan’s 20% currency devaluation in March, making its imports that much more expensive. The second quarter’s 524,000 teu was still 14% more than in the same period of last year, however, helping to reduce ocean carriers’ costly container equipment imbalance problem.

Most of the second quarter’s growth occurred in the Eastern Mediterranean, where cargo increased by 17%, compared to 11% out the Western Mediterranean. For the first six months of the year, the corresponding increases were a more startling 15% and 7% respectively, underlining the competitiveness of Eastern European suppliers.

The consequence is that the average utilization of all vessels sailing from the Mediterranean to Asia rose from 51.3% in May to just 53.5% in June. This was still a difficult freight rate negotiating position for ocean carriers’ sales executives, although they made the most of it.

Drewry believes this year’s peak season will remain poor, underlining the need for ocean carriers to plan vessel capacity reductions more seriously after the beginning of September. The withdrawal of the G6’s ABX is a good start, but more will be required. In this respect, the introduction of the P3 in 2Q 14 complicates matters.