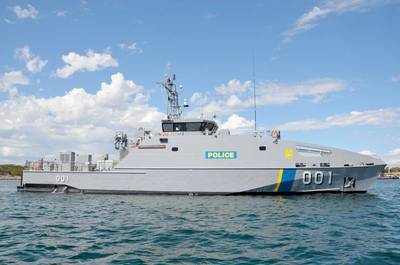 Austal Chief Executive David Singleton said this Guardian-class Patrol Boat delivery was unique as it is the first to take place under COVID-19 restrictions.

The 39.5-meter steel monohull patrol boat—designed, constructed and sustained by Austal Australia—is based on a proven design platform that has included the 38-meter Bay-class, 56-metre Armidale-class and 58 meter Cape-class patrol boats that are in service with the Australian Border Force and Royal Australian Navy.

The PSS President H.I Remeliik II is replacing its namesake predecessor, a Pacific-class Patrol Boat that has been in service in Palau since 1996.

Faster, with improved seakeeping, better amenities and an enhanced mission capability – including an integrated stern launch and recovery system – the Guardian-class Patrol Boat(s) provide the Palau Bureau of Maritime Security with a much improved naval asset to carry out border patrols, regional policing, search and rescue and many other operations domestically and internationally.

The Pacific Patrol Boat Replacement (PPB-R) Project was awarded to Austal in May 2016, with an additional contract option awarded in April 2018, taking the program to 21 vessels valued at more than A$335 million.