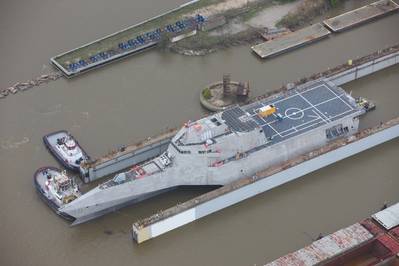 USS Canberra is one of 19 Independence-variant littoral combat ships (LCS) that the U.S. Navy has contracted Austal to build. Twelve have been delivered to date.

The 418-foot vessel is the first Navy ship that Austal has launched in 2021, and it is the first to launch from Austal's recently acquired dry dock.

USS Canberra will next undergo sea trials prior to delivery.

LCS 30 is the second U.S. Navy ship named in honor of the first HMAS Canberra, a Royal Australian Navy heavy cruiser that fought in the Battle of Savo Island in August 1942 during World War II.