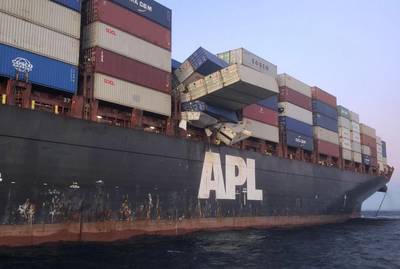 The 277-meter APL England lost dozens of containers overboard off the coast of Sydney, Australia in May. (Photo: AMSA)

The Australian Maritime Safety Authority (AMSA) is ordering CMA CGM's APL to find and recover the remaining containers lost from the APL England off the coast of New South Wales last month.

So far, Australian authorities have recovered 15 containers from the 5,510 TEU capacity containership that spilled at least 50 boxes overboard after temporarily losing propulsion while sailing from Ningbo, China to Melbourne in May. On Monday AMSA directed the shipowner to search for and retrieve the 35 containers that are still missing.

The agency's General Manager Response Mark Morrow said he expects the owner and operator ANL to respond to the direction with a detailed search plan in the coming days. “Failure to comply with this direction constitutes an offence under Australian law,” he added.

AMSA said it has used drift models and container sightings to outline a search area of about 1,000 square kilometers stretching between the Illawarra and Sydney’s southern suburbs where the lost containers could be. It said boxes within the area pose the most immediate environmental threat and may present a safety hazard for commercial fishing.

Surgical masks and other items from the overboard containers have been found washing up onto Australian beaches.

“The owner’s and operator’s responsibility to clean-up the mess left behind by their ship does not end at the water’s edge,” Morrow said.

“We have only just finished cleaning-up more than 60 containers and their contents from the seafloor off Newcastle after Yang Ming’s ship YM Efficiency lost containers back in June 2018.”

Australia is still pressing Yang Ming to pay for the cleanup costs after the Taiwanese shipowner and its insurer Britannia P&I refused to take responsibility for retrieving the containers and associated debris that had scattered for miles along Australia's east coast. “That is not a pollution legacy that any respectable ship owner or operator would want to leave behind in their wake,” Morrow said.

Similar to the YM Efficiency incident, Australian authorities determined stowage deficiencies likely led to the APL England container loss. The Singapore-flagged APL England has been detained by authorities in the Port of Brisbane after Australian inspectors found inadequate cargo lashing arrangements and heavily corroded securing points for containers on deck.

The ship's master has been charged for pollution and damage of the marine environment as a result of poor cargo loading.

Will Container Shipping Woes of the 2010s Repeat?

Reduced volumes are currently posing a major challenge to container shipping due to the COVID-19 crisis. So far, freight…