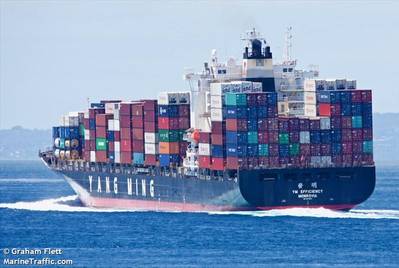 A cargo ship lost 83 containers over-board during heavy seas off Australia and items including nappies and sanitary pads are washing up on beaches while there are fears the ill-fated containers will pose a hazard for shipping and whales.

The YM Efficiency, operated by Taiwan shipping company Yang Ming Marine Transport Corporation, was sailing from Taiwan to Sydney when it encountered 5-metre swells in the Tasman Sea, about 30 km off Australia's east coast late on Thursday.

"They're 40-foot containers, they sit about a foot or two off the water ... even in the best of conditions they're difficult to spot, but at night and in a swell, almost impossible," Roads and Maritime Services executive director Angus Mitchell told a television channel on Saturday.

The Liberian-registered vessel rolled heavily in the foul weather causing the 83 containers to slide off, while another 30 were damaged, the New South Wales Roads and Maritime Service said on Saturday.

Television pictures showed some containers spilt open and hanging precariously off the ship.

Mitchell said the cargo was not hazardous but the exact contents had yet to be established.

Some Australians feared the flotsam may also pose a hazard to humpback whales north along the coast.

"How dare they pollute our local waterways ... whale migration too. Feel so sad a foreign vessel has such an impact on our environment," said one Twitter user called "Signflyer".

"They should be made to collect all 83 containers."