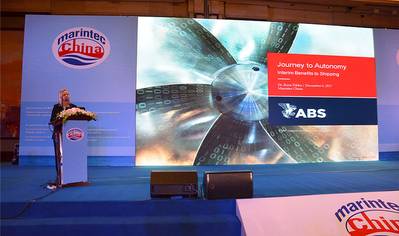 “With fast-paced advances in technology, we are on a journey to autonomous transportation at sea,” said ABS Executive Vice President for Global Marine Dr. Kirsi Tikka, at the 2017 Marintec China conference in Shanghai, China. “For the shipping industry, at sea and ashore, it will be a gradual process of evolution.”

Tikka, who chaired a panel session on the marine industry’s journey to autonomy, described the benefits that will come during interim phases of the voyage to autonomous shipping. “The transition to the next generation of shipping is fueled by automation, data and connectivity. Ultimately, success will rely on an iterative process that requires designing, building and testing interim outcomes. The industry will increasingly apply a systems engineering-based approach to build in robustness and reliability into the design. This process can increase the reliability of navigation, propulsion, auxiliaries and communication – all of which will contribute to improving safety and efficiency. If implemented correctly, evolutionary development will introduce significant benefits to shipping at each phase, before we reach autonomy on a larger scale.”
Tikka also discussed how a new talent profile with different skills will be needed as the industry moves to autonomy. “While we transition to further autonomy, increased automation and connectivity will change how the crews interact with ship systems and shore-based support. Managing significant change, in an industry where changes are adopted slowly, requires innovative thinking and a diverse blend of education and experience.”
Tikka said, “The role of class, with its strong focus on safety, is a fundamental component in the path toward smart shipping. With increases in automation and digitization, confidence in quality, reliability and cyber security will be key to ushering in a new era of smart shipping.”