As the maritime industry faces numerous environmental and efficiency challenges, the future is ship automation and Wärtsilä Voyage is a driver. Sean Fernback, President, and Thomas Pedersen, Director, Automation & Dynamic Positioning, Wärtsilä Voyage discuss the path and the pace with Maritime Reporter TV.

Autonomy is a journey and there is no question that, at some point, various vessels in different classes will be fully autonomous. The question is; which vessels will be first? Will they be coastal? Will they be tugs? We don't know. What is required to deliver a fully autonomous vessel is hugely complex. When you look at the existing fleet in maritime, you're looking in technology in an order of magnitude that is almost incomprehensible to the technology we have on vessels today. So today most vessels will have navigation, sensors, sonar, weather and comms, that sort of thing. Autonomy is about delivering a set of solutions where ultimately the sum total of those solutions will deliver a fully autonomous vessel.

I hope not! We try to look a little bit less at ‘autonomous ships,’ and more at automating the operations of a ship. That same ship can have different operational profiles depending on what the ship owner is using it for, and some of those operational profiles will lend themselves much better to be automated.

The most obvious example is a ship going between two ports, very short transit time in an area where there's no risk of collision with anything else. That would be the simplest operational profile to automate and it would make sense to automate more of the task being done on such a ship than ships operating in more complicated environments. Everything we do, everything we develop, we develop together with customers. We strive to find customers that have challenges in the current operations, (and we) can help by offering some level of automation or advanced decision support systems. 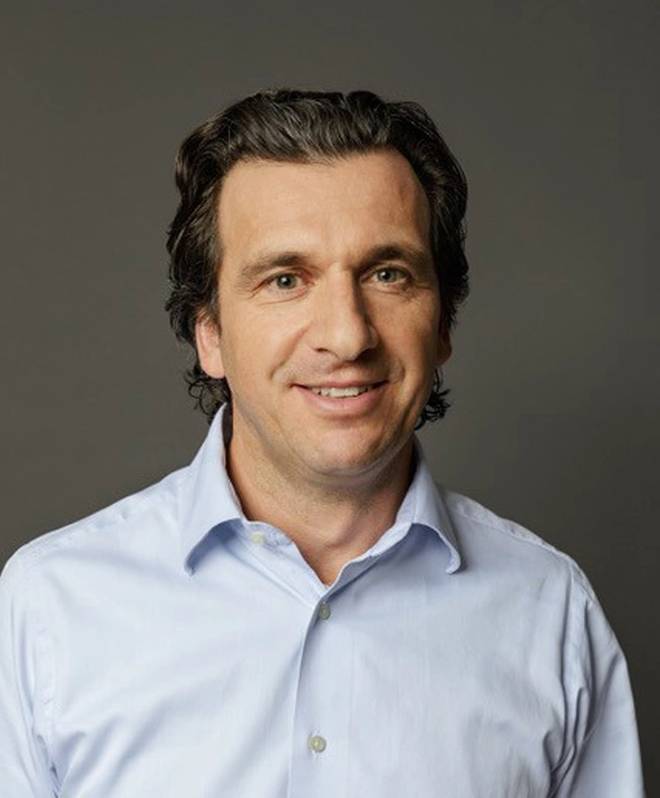 "Autonomy is about delivering a set of solutions where ultimately the sum total of those solutions will deliver a fully autonomous vessel." Sean Fernback, President, Wärtsilä Voyage. Photo Courtesy Wärtsilä Voyage

It's the first company to install this that we can talk about. It's an interesting case in many different ways. It started as an open discussion with ASC, understanding their operations and then finding common ground (with our offerings).

So we are delivering a system that is able to automatically control the physical movement on the ship when going from A to B. This is not meant to replace the crew, it's meant as something to enable the crew to focus on all of the other tasks that are related to navigating.

What we deliver is a system with the technology built on top of a dynamic positioning system with some changes to the software, because this is a completely different task than that of a normal DP system.

There are a lot of things going on before there's even a contract. There has to be a lot of understanding of the ship's operational profile. Does it lend itself to use the capabilities we have? And if we assume that these things fall into place, then the first thing that will have to happen is the physical installation of the system on board. One the key efforts is to first make sure that there is a proper integration between our system and the propulsion system on the vessel. When that is done, we start tuning the system and doing some dry runs via simulation (simulation on the specific routes the vessel normally sails).

It is definitely a step process, (which is why) we see autonomy as a journey. I think the other thing that one has to take into consideration is the affordability. Wärtsilä is really trying to pull its central gravity more towards the decarbonization agenda, so we want to underpin that with activities and solutions that can help the various vessels move towards emission reduction. I think autonomy is just one of those things. Less so perhaps on emissions, but much more on reducing operational costs in terms of crew reduction.

So it's definitely a step process, and I had some experience in the automotive industry and I think it's a good example to follow. They created five levels of autonomy, and I think we're at three now, level three is all proven. These things are complex and costly to develop, they take time, and they need to be delivered with very high standard of quality and safety, of course, which is number one. So it is a step journey.

It's very important and it's definitely the way the industry will move. The question is how quickly and how much of a part can we play in the speed of that paradigm shift? I think the smart move program as Thomas described was typically what we call proof of concept. It's something we did very specifically for one customer to prove out the learnings of the technology and the operations, and also hear what the customer has to say.

The autonomy program is really important. Thomas heads our ‘On Vessel Product Group’ and he has three big departments within that group in terms of managing the portfolio: automation, navigation and autonomy. So all the autonomy investments and the programs that we have in place, as well as the programs we will develop in the future will sit within Thomas' group.

I think the one word I would use Greg is “substantial.” Voyage is the pathfinder for Wärtsilä in terms of taking it through this digitalization process. We're very well supported by the board of management and the board of directors. We're not a mature business, and our numbers reflect it because we are a composite of many acquisitions that have been made over the last six years that are now really coming together. So they've invested north of half a billion (dollars) on acquisitions because they see this as the future. (Our job is) to put all of that to good use, creating a portfolio of products and services and solutions of the future. Then we start to drive not only the industry, but also ourselves, to drive some profitability into the business. 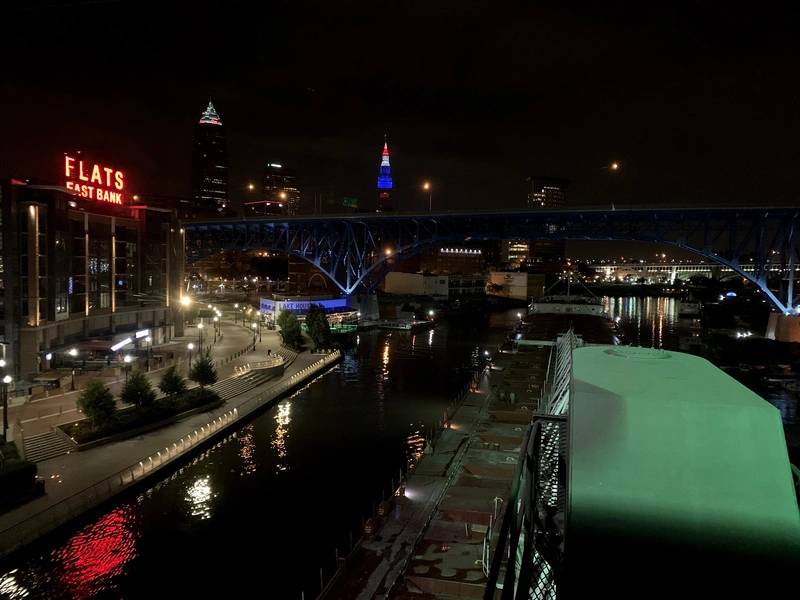 Wärtsilä Voyage introduced Wärtsilä SmartMove Suite, its flagship offering for semi-autonomous sailing that features advanced sensors and high-accuracy ship control systems, effectively taking the concept of automated dock-to-dock operations to the next level. Fully retrofittable, the SmartMove Suite can soup-up existing vessels with next-generation capabilities to improve safety, efficiency and productivity. The first order was placed by American Steamship Company (ASC), a subsidiary of Rand-ASC Holdings LLC, and has been installed on the MV American Courage, a 194m Great Lakes self-unloading bulk freighter with a cargo carrying capacity of 24,300 gt. Apart from its size, the ships area of operations – the winding, often narrowing and sometimes congested Cuyahoga River in northern Ohio – created a many challenges, and the Wärtsilä solution successfully passed the test, operating on the American Courage since March 2020. For the project Wärtsilä Voyage provides a standard hardware setup with redundant controllers and displays, along with a sensor suite (comprising gyro, MRU, wind, and GNSS sensors). This is connected to a single digital platform through which five software products are available: SmartDock, SmartTransit, SmartEntry, SmartPredict, and SmartDrive. The core blocks of software (including controllers, sensor processing, Thruster Allocation Logic and track follow) are sourced from Wärtsilä Voyage’s Dynamic Positioning portfolio, which has been in use over many years in some of the world’s harshest environments. 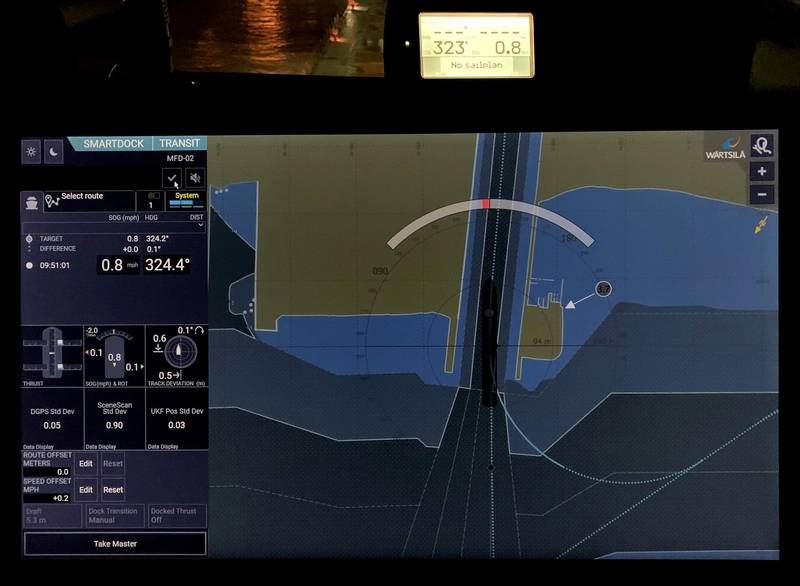