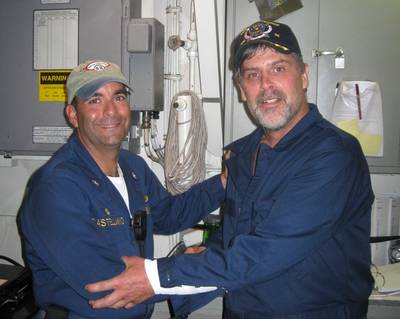 This is a 'sea story,' my sea story," said Castellano in beginning his recount of the dramatic events. "There are many perspectives about what happened that day, this is mine.

"My story is about teamwork ... It's a human story about ordinary people doing extraordinary things," continued Castellano.  The rescue of Phillips took place over several days off the Somali coast. It involved Sailors, special operations forces and an alphabet soup list of what Castellano referred to as, "three-named agencies."

Castellano was ordered to investigate a distress call April 8, 2009, several hundred miles off the coast of Somalia. His staff immediately began operations planning as intelligence came in and the Bainbridge closed in on the distressed vessel.

The Bainbridge arrived after a standoff between Maersk Alabama crewmembers and Somali pirates. Maersk Alabama crewmen were able to repel the pirates, but the pirates managed to take Maersk Alabama captain Richard Phillips hostage and escape in one of the cargo ship's lifeboats.   The lifeboat was a far cry from the dinghies popularized in movies like 'Titanic'. It was a covered fiberglass vessel with enough fuel, food and supplies for nine days. Rescuers had originally hoped that the vessel would simply run out of fuel, but it proved to be far more resilient than previously assumed.

"That lifeboat was the bane of my existence. It just kept going, I should buy stock in that company," said Castellano to laughter and applause from the audience.

Castellano notes that in the days that led to Phillips' rescue, he slept no more than four hours. He oversaw the establishment of a water-landing zone, coordinated rescue efforts and personally negotiated with the pirates to ensure Phillips' release.

Still, Castellano insists that the rescue was a, "total team effort."  FBI hostage negotiators, snipers, and USS Bainbridge sailors worked together with Castellano to ensure Phillips' rescue. The lifeboat was repeatedly, "waked" [deliberately hit with the wake of the Bainbridge] to prevent it from getting too close to the Somali shore. And the Bainbridge was used to conceal a water landing zone for special operations teams who parachuted in under the cover of darkness.

Snipers were able to target the pirates from the Bainbridge's fantail, killing three and ending Phillips' ordeal.   Castellano credits his NPS education with his ability to make the tough decisions and to endure the sleepless, high-stress environment that culminated in Phillips' rescue.