by Diptendu Lahiri in Bengaluru February 18, 2020 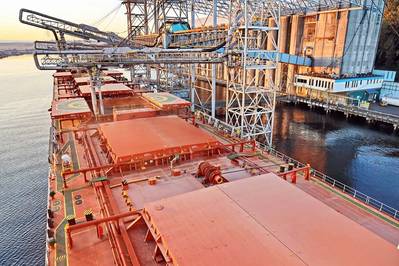 The Baltic Exchange's main sea freight index rose to a two-week high on Tuesday, as higher rates for panamax and supramax vessels more than offset the capesize segment lingering in the negative zone.

The Baltic index, which tracks rates for capesize, panamax and supramax vessels that ferry dry bulk commodities, rose 16 points, or 3.7%, to 450, registering its biggest one-day percentage gain since late November.

The capesize index gained for a second straight session, up 30 points at -257.

"Capesize is gradually gaining because there are other geographies besides China, like Australia is a big exporter, and the United states and Europe import from them," said Peter Sand, chief shipping analyst at BIMCO.

However,"capesize won't come out of the negative zone until shipping activities become normal in and out of China."

The index had dropped to a record low of -294 points on Friday.

Shipping demand from China, the world's second-largest economy, has got a blow from the coronavirus outbreak that has forced authorities to shut factories and mills.

"The uptick noted in demand figures in the Atlantic and ECSA (East Coast South America) helped owners to push for higher (panamax) rates," analysts at Allied Shipbroking said in a weekly note on Monday.

The supramax index rose 7 points to 481.

(Reporting by Diptendu Lahiri in Bengaluru; Editing by Vinay Dwivedi)