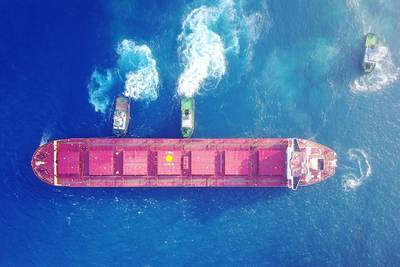 The Baltic Exchange's main sea freight index, which tracks rates for ships carrying dry bulk commodities, ticked up on Wednesday on gains in the capesize segment.

The index, which factors in rates for capesize, panamax and supramax shipping vessels, added 5 points, or 0.2%, to 3,058.

The gains came even as benchmark iron ore futures in China fell nearly 4% on Wednesday on cooling demand as mills controlled their crude steel production, while arrivals of the steelmaking ingredient gained.

Some steel producers in China's Jiangsu, Fujian and Yunnan provinces were told by the government to cut production as the country aims to keep its annual output no higher than it made in 2020.

Argentina's government has urged citizens to limit water use in a bid to alleviate pressure on the Parana River, a key grains thoroughfare that is at a 77-year low, a situation which is hampering shipments of cereals including soy and wheat.

(Reporting by Seher Dareen in Bengaluru; Editing by Aditya Soni)