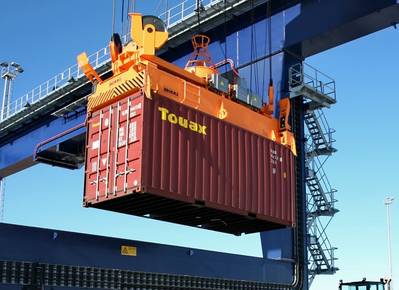 The Port of Barcelona reports it has become the first port in Spain to complete and make available a procedure for its customers and users in line with the container weighing new rules adopted by the International Maritime Organization (IMO) and incorporated into Chapter VI of the Safety Of Life At Sea (SOLAS) Convention specifying that shippers (forwarders, logistics operators or owners of the goods) shall be responsible for weighing each full container before shipment. Barcelona’s port community is preparing to adapt to the new requirements, the port said
The obligation to declare container weight before shipment is designed to improve the safety of seafarers and of everyone involved in the logistics chain. Errors in declaring the weight of containers lead them to be positioned incorrectly in the ship's hold and have caused major accidents at sea in recent years, making ships list and causing cargo to be lost, while also endangering the lives of many sailors.
Similarly, an incorrectly weighed container can cause safety problems in loading and unloading operations and in land transport, as truckers worldwide have repeatedly condemned.
Now it is mandatory for every container to carry a document certifying its gross weight, which is the sum of the weight of the container and its cargo. There are now two options available: weighing the cargo then adding the weight of the empty container, or weighing the loaded container once it has been closed and is ready to be shipped.
The shipper will be responsible for communicating the certified gross weight of the container to the consignee to allow time to communicate with the terminal before the ship's stowage plan and cargo planning are performed.
Every day the Port of Barcelona receives about 1,700 full containers - 2,500 on the busiest days - intended for export, and from July 1 shippers will have to include a document attesting to confirmed gross weight. To help exporters and operators to adapt to the new situation, the port has established the documentary information procedure for the verified gross weight between the parties involved: the shipper, consignee and terminal.
The documentary procedure will be made by an EDIFACT VERMAS (Verified Gross Mass) electronic communication for each container, which will include information such as the name of the person responsible for the weighing, the method used and the date weighed. This procedure will take place whether the container has been weighed directly by the shipper, commissioned to a weighing station or the weight has been checked at the terminal. Both the map and the communication flows have been designed to enable all these procedures to take place as early as possible before the container arrives in the terminal, while ensuring that everyone involved has the required documents and the relevant confirmations.
The procedure for communicating verified container weights at the Port is the result of work performed by the Telematics Forum, a Barcelona Port Community working group set up in 1994 to improve port processes with initiatives such as implementing the rollout of electronic data interchange (EDI) to all documentary procedures of companies and organizations.
SOLAS designates the States as the parties responsible for the wording and application of regulations for weighing containers in their territories. TCB and BEST, the two international container terminals in the Port of Barcelona, along with other companies of Barcelona Port Community involved in international trade, are hoping to incorporate these new specifications into Spanish port legislation to set up the mechanisms and infrastructure necessary for their implementation.