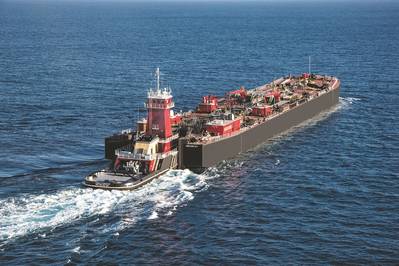 The family-owned oceangoing tug and petroleum barge firm filed alongside several of its subsidiaries Monday in the U.S. Bankruptcy Court for the Southern District of Texas.

Legal and financial troubles have mounted for Bouchard since an October 2017 explosion killed two crew members on one of the company's barges off the coast of Texas. The National Transportation Safety Board (NTSB) determined that the blast likely stemmed from a lack of effective maintenance and safety management.

In the years since, Bouchard has been sued by dozens of vendors alleging unpaid bills, many of which remain unresolved.

In late 2019 Bouchard was fined for whistleblower retaliation violations realting to the barge explosion investigations, and in February 2020 it was sued in New York over unpaid unpaid crew wages. That same month, the U.S. Coast Guard issued separate captain of the port orders to select Bouchard vessels in New York Harbor and Port Arthur.

In March, the company's president and CEO Morton S. Bouchard III wrote in a letter to staff, customers and vendors that all back pay had been processed and that the company was working to raise capital that would allow it to return its vessels to service.

The company said Tuesday in a statement announcing the chapter 11 proceeding that it aims to "emerge as a stronger enterprise positioned for long-term success" with its fleet "in full compliance with all operating regulations".

Bouchard said it intends to fund the restructuring process with debtor-in-possession financing, which will provide the liquidity needed to maintain normal operations, including paying its employees, suppliers and vendors in full.

Bouchard has appointed Mark Berger of its restructuring advisor Portage Point Partners to serve as chief restructuring officer. Kirkland & Ellis and Jackson Walker are acting as the company's legal counsel, and Jefferies is acting as investment banker.

The company will also fill several open executive management positions as part of the restructuring.