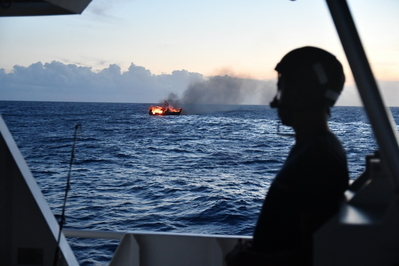 The Coast Guard continues to respond to an incident aboard the commercial fishing vessel Miss Emma off Oahu, Wednesday.

“We’re pleased there was no loss of life in this case, and there are no current reports of pollution,” said Lt. j.g. Seth Gross, a command duty officer for Coast Guard Sector Honolulu. “We will conduct another overflight of the area today, and Coast Guard personnel are investigating the cause of the fire."

The vessel caught fire Tuesday afternoon about 8 miles south of Sand Island prompting a search and rescue response. The ship burned throughout the night and subsequently sank at 7:22 a.m. seven miles south of Barbers Point in 2,700 feet of water.

Salvors arrived overnight and began fighting the fire this morning intending to salvage the vessel. Coast Guard Sector Honolulu watchstanders coordinated a Coast Guard Auxiliary Air flight for sunrise with a pollution responder aboard to assess any visible pollution or debris. The maximum potential fuel load for the Miss Emma was 3,200 gallons of diesel, of which about 1,500 gallons was reportedly aboard. The fire likely consumed some or all of that fuel.

The Coast Guard received the initial mayday call from the crew of the Miss Emma at 4:29 p.m. Tuesday reporting the fire. A Coast Guard Station Honolulu 45-foot Response Boat-Medium crew was first on scene and rescued the six crew, and an NOAA observer from the fishing vessel’s liferaft. They arrived safely to Pier 38 in Honolulu with no reported injuries.

The USCGC Joseph Gerczak (WPC 1126) crew responded Tuesday and recovered the liferaft. They were on scene throughout the night to ensure that the burning vessel did not become a hazard to local maritime traffic. Following the sinking, they observed no signs of pollution or debris.

Weather is variable winds with seas to 3 feet. There is a small craft advisory in effect for the main Hawaiian Islands.