Captain Martin Curtin, tugboat operator by trade, is the founder and CEO of... 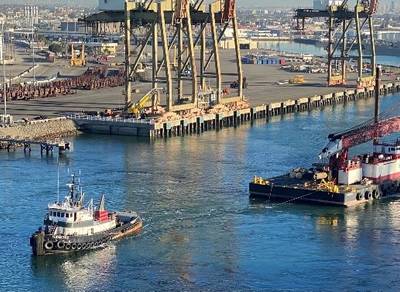 Americans became aware of our nation’s supply chain problem when they witnessed a hundred cargo ships anchored off the ports of Long Beach and Los Angeles, stymied from moving cargo to store shelves throughout the United States. Such circumstances could become all too common, especially as recently adopted engine emission regulations force maritime companies out of the country’s most impacted ports, or limit their ability to expand operations as America’s demand for imports and exports grows.

Tugboats and barges support California’s essential role in global trade by moving millions of tons of freight, all while their owners prioritize reducing engine emissions. These vessels have an environmental advantage over other modes of freight transportation, emitting 43% less greenhouse gasses than rail and more than 800% less than trucks that move cargo over California’s already congested roads. Innovation is equally important in our industry—electric tugboat research is ongoing, helping us achieve Governor Newsom’s climate change goal of zero-emissions.

The California Air Resources Board (CARB), a board largely appointed by Governor Newsom, is tasked with assessing the health risks associated with engine emissions, and rightly so. Unfortunately, CARB’s recently adopted commercial harbor craft (CHC) regulations depart from a longstanding incentive-driven approach to improving air quality.

The regulations, which could go into effect next year, discount the importance of best available science, economic feasibility and public safety. CARB’s regulations mandate engines and technology that either do not exist or are too large, requiring vessels to undergo major reconstruction or worse yet, cause vessels that cannot structurally comply to be removed from service. The cost of compliance is in the millions of dollars per vessel, well beyond the reach of most family-operated businesses.

Experts in the field believe this new approach results from CARB’s flawed engine emission data. CARB inflates the number of vessels and the time they spend in regulated waters, and fails to understand how vessels operate. We are concerned that they overstate health risks, especially when assigning health risks to vessels that spend a majority of their time many miles from shore.

The use of Diesel Particulate Filters (DPFs) required by CARB compounds safety risks. Currently, there are no DPFs for commercial marine applications. DPFs found on tractor trailer trucks have been known to cause inopportune and dangerous decreases in engine performance for extended periods of time as filters clog, and in some cases, catch fire. Such incidents could be life threatening at sea and pose a secondary threat to vessels containing petrochemical products as fuel or cargo. Our mariners cannot just pull over or get out and walk away like truck drivers do when their DPFs malfunction. Before mandating DPF, the technology should be certified by engine manufacturers and the U.S. Coast Guard as safe.

To be clear, the industry never called on CARB to abandon its goal of updating current air quality standards. In fact, many vessel owners would have supported more stringent regulations provided the technology was available and the compliance timeline was reasonable.

Unfortunately, CARB passed unreasonable amendments. Now vessel companies question whether the State’s Carl Moyer Program, which provides grants for lower emission engines and vessel replacement, is prepared for unprecedented demand for funding. The state program is seriously underfunded and historically the local air districts that allocate the funds favor other industries. Our industry alone will require over $1.3 billion dollars to replace engines, which does not account for the expense of vessel replacement ($15-$25 million per a tug) and emerging technology.

Moreover, CARB assumes that engine manufacturers can meet the immediate need for engine technology that currently does not exist, and that ship builders located in other states are prepared to accept boat orders and can make deliveries by the time the regulations start going into effect in January 2023.

If the Newsom Administration is to achieve its zero-emission goals without causing serious disruption to America’s supply chain and increasing inflationary pressures, this is the year for the State Legislature to make sure the Governor’s budget sufficiently funds lower emission engine programs and earmarks funds specifically for harbor crafts. Anything short of this will reduce the inventory of operating tugboats, placing America’s supply chain at serious risk the next time large cargo ships wait in our Nation’s largest ports for harbor escorts.