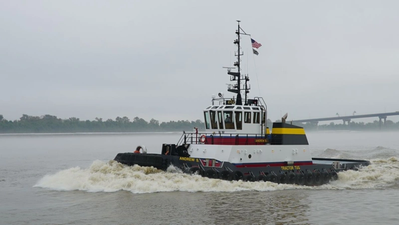 Each engine generates 3,004 bhp at 1,800 rpm and a selective catalyst reduction (SCR) system. At 6,008 bhp, Andrew S. is the most powerful Tier 4 tug on the Mississippi River.

The Andrew S. measures 100’ x 38’ x 13.5’ and has an estimated bollard pull of 84 tons. Additional features of the tug include U.S. Coast Guard-approved engine room monitoring and fire/alarm systems, a fixed CO2 fire extinguishing system, and both the engine room and crew quarters have soundproof insulation.

Bisso’s new tug is also equipped with a Cat SCR system. “Caterpillar developed the SCR system we use in the new 3500E series. Cat SCRs have stood the test of time and durability in off-road vehicles, highway trucks, and heavy equipment. The system utilizes diesel exhaust fluid (DEF), a urea-based fluid that is mixed with the engine’s exhaust, causing a chemical reaction that significantly reduces NOx in the exhaust. At the same time, the new Cat 3500E series engines maximize performance while increasing fuel efficiency. When the Bisso team saw how the engine performs, they were impressed,” said Smith

Main Iron Works Inc., located in Houma, Louisiana, constructed the tug. With the Andrew S., Bisso now has a total of thirteen tugs a part of their fleet, eight of which are ASD tractor tugs, making the company the largest fleet owner of ASD tractor tugs on the Mississippi River.

Bisso plans to christen the Andrew S. on the Mississippi River on December 5th in New Orleans, Louisiana.