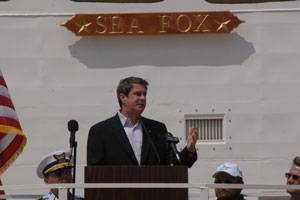 US Senator David Vitter (R-La.) speaking to Bollinger employees and guest during Bollinger's celebration of success on the completion of the 75th 87 ft Marine Protector-class Coastal Patrol Boat.

Guests included dignitaries from federal, state and local agencies, including members of the U.S. Coast Guard, as well as employees of the Bollinger workforce.

The USCGC Sea Fox is the 124th new cutter designed, built and delivered by Bollinger to the Coast Guard.  The vessel represents the 75th cutter of the class.  The Marine Protector Class patrol boat contract was awarded to Bollinger on March 13, 1996. Today, more than 13 years later, Bollinger celebrates the completion of the Marine Protector-class program, and the recent award of the Fast Response Cutter (FRC)/Sentinel Class patrol boat program.

The Bollinger Family expresses their appreciation to the men and women who have made the Marine Protector Class Program a success.