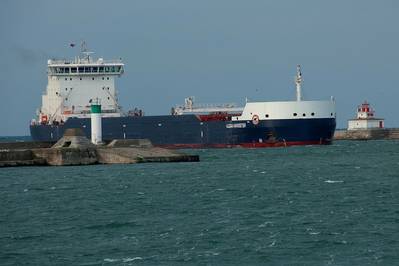 Algoma Central Corporation announces $160 million investment in fleet expansion and fleet renewal
Algoma Central Corporation announced that it has acquired a 2009-built handy size self-unloading ocean class vessel, the Gypsum Integrity, from Gypsum Transportation Limited. The vessel is being renamed the Algoma Integrity.
In addition, the company announced that that it has signed contracts with a subsidiary of Uljanik d.d. of Croatia, for the construction of two new Equinox Class 650 foot self-unloading dry bulk lake freighters. These contracts are contingent on the delivery by the shipyard of acceptable security for construction installments required under the contracts.
Algoma's purchase of three coastal class vessels since 2009, combined with the ongoing investment in new Equinox Class ships, brings the Company's committed investment in fleet renewal for the domestic dry-bulk fleet to over $560 million.
"We are very pleased to have acquired the Algoma Integrity at this time," said Wayne Smith, Senior Vice-President, Commercial of Algoma. "The ship is well constructed and was designed to carry heavy cargoes. The addition of the Algoma Integrity to our Canadian flag fleet gives us added flexibility to meet the needs of our customers. The Algoma Integrity will eventually be placed in the international pool of self-unloading vessels in which Algoma is a member and has other ocean going self-unloaders participating."
The Algoma Integrity's deadweight at a summer draft of 11.5 meters is 47,556 MT and the vessel is 197.1 metres (646.7 feet) long and 32.2 meters (105.6 feet) wide. The Algoma Integrity joins Algoma's existing Canadian coastal class vessels, the Algoma Mariner and the Radcliffe R Latimer.
"We are looking forward to the arrival of the new Equinox 650 Class ships, the second phase of our domestic fleet renewal," said Ken Bloch Soerensen, President and CEO of Algoma. "The specialized service needs of certain of our customers require the size and type of vessel that Algoma has consistently provided."
The two new Equinox Class ships will serve a range of customers with particular focus on salt and aggregates industry shippers. The first ship is expected to enter service early in 2017 with the second ship to follow later that year. The Equinox 650 Class has an overall length of 198.4 meters (650.8 feet) and is 23.8 meters (78 feet) wide. The ships are expected to carry in excess of 24,000 metric tons at maximum Seaway draft. These vessels will also feature a forward discharge boom and both a bow and stern thruster.
These new 650-foot vessels will include all of the advances inherent in the Company's proprietary Equinox Class design. This includes the installation of exhaust gas scrubbers, certified for use on our Equinox Class ships to remove at least 97% of all SOx emissions from the exhaust stream. The scrubbers, combined with other technologies and advancements on the ships, makes the Equinox Class the most environmentally advanced and efficient vessels operating on the Great Lakes and St. Lawrence Waterway.
The ships will be built at 3.Maj Brodogradiliste d.d. Shipyard, which has been building ships in Rijeka, Croatia on the northern shores of the Adriatic Sea since 1892.