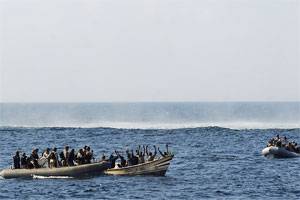 Two ship seizures in the Indian Ocean in recent days appear to indicate that pirates have broadened their focus beyond the heavily patrolled Gulf of Aden.

Bowasir and its 23-member crew were operating more than 380 nautical miles southeast of Kismayo, Somalia. Nipayia and its 19 merchant mariners were pirated 490 nautical miles east of Mogadishu, the official said.

The seizures were the farthest yet from the Gulf of Aden, where the U.S. Navy 5th Fleet and the international community stepped up patrols after piracy soared last year.

"This appears to be a new round of attacks well off the east coast of Somalia vs. in the Gulf of Aden where we had seen the majority of attacks last year and in 2009 to date," the official said.

The latest hijackings expand the pirates' operating area, creating what the official called "a monumental challenge" to those working to prevent piracy.

"To put the challenge into geographic perspective, the area involved off the coast of Somalia and Kenya as well as the Gulf of Aden equals more than 1.1 million square miles," he said. "That is roughly four times the size of the U.S. state of Texas or the size of the Mediterranean and Red Seas combined."

Task force members have national mandates to conduct counter-piracy operations and work together "to support our goal of deterring, disrupting and eventually bringing to justice the maritime criminals involved in piracy events," Gortney explained as the task force became fully operational in mid-January.

CTF 151 operates primarily in and around the Gulf of Aden but also in the Arabian Sea, Indian Ocean and Red Sea.

At any given time, 12 to 16 warships from the task force as well as non-coalition nations are operating in the region.

"The international presence there is significant," the Navy official said. "We are working with everybody who is there."

But the vast size of the region would require 61 ships just to control the internationally designated shipping lanes, he said. "And that's a small portion of the area we are talking about."

Despite the geographic challenges, the task force's efforts are showing signs of success.

Pirates seized 42 ships last year, but 80 of the 122 piracy "events" were unsuccessful, the official reported. So far in 2009, 48 "events" have occurred, with 11 hijackings and 37 unsuccessful attempts.