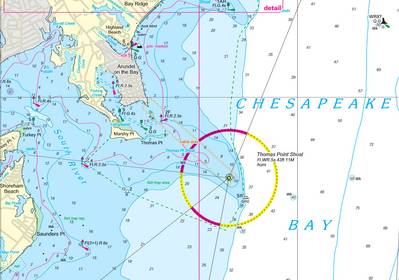 Newport, Rhode Island – Nv-Charts, a global supplier of charting products for mariners and cruising sailors, has now extended its coverage and produced new chart regions for Chesapeake Bay, just in time for the 2012 cruising and boating season.

The coverage is divided into two regions, North and South. The North region includes Delaware Bay and the Chesapeake-Delaware canal, coverage from Cape May, N.J., to the Potomac River; and the Southern region continues down to Norfolk and the surrounding environs.

Each paper chart set includes a CD, containing the entire set in digital format, for use on PCs with navigation software and GPS input; a Harbor & Anchorage Pilot Book for the region with comprehensive navigation and cruising information and regional descriptions, weather and tide information, and cruising destinations, harbors, moorings, and anchorages, each entry referenced on the charts; and a clear vinyl waterproof cover.

Nv-Charts are based on government data, confirmed and/or revised through Nv-Charts’ own survey vessels. Having charted harbors, checked georeferencing points, and double-checked buoys and lighthouses, Nv-Charts offers the newest cartography in both paper and digital format. Nv-Charts also offers charting products for the U.S. East Coast, from New England to Key West; Europe, the Bahamas, Puerto Rico, the entire Caribbean, and more.

Nv-Charts began producing charts for navigation in Germany some 30 years ago. Nautical Publications, the parent company of Nv-Charts, produces about 600 charts and over 1000 details & harbor plans, derived from Nv-Charts’ own cartography and surveys. These charts are designed with the prudent mariner in mind; coasts and anchorages are regularly updated through new surveys and aerials.