China Goes from Driver to Brake for Crude Oil, Iron Ore and Copper 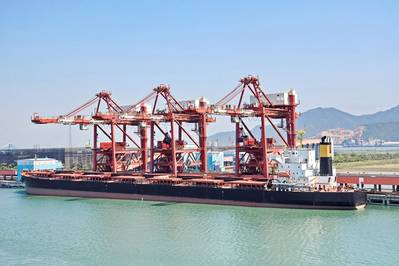 China has switched from driving global demand for major commodities to being a drag on growth, with July's customs data confirming the weakening trend for imports of crude oil, iron ore and copper.

The exception to the trend was coal, but the sharp gain in July's imports of the polluting fuel are more a result of China having to go the seaborne market because of domestic policies that curbed local output.

China, the world's biggest importer of crude oil, brought in 41.24 million tonnes in July, equivalent to 9.71 million barrels per day (bpd), according to official customs data released on Aug. 7.

July was the fourth consecutive month that crude oil imports were below 10 million bpd, a far cry from most of 2020, when imports surged from May to November as refiners stocked up on crude bought cheaply at the height of the crash caused by the coronavirus pandemic and a brief price war between top exporters Saudi Arabia and Russia.

At that time imports rose as high as a record 12.94 million bpd in June last year, but apart from a brief spike higher in March this year, 2021 has been a story of declining crude purchases by China.

Crude imports for the first seven months of this year are 5.6% below that for the same period in 2020.

That percentage decline may accelerate in coming months given the strong imports in the second half of 2020 will give a higher base for comparison.

However, this is more likely related to a scarcity of available cargoes of spot LNG as demand for the super-chilled fuel soars across Asia to meet rising electricity consumption during the summer air-conditioning peak.

Soft metals
Among metals, iron ore imports fell for a fourth consecutive month, with 88.51 million tonnes of the steel raw material arriving in July, down from 89.42 million in June and some 21% below the record of 122.65 million from July last year.

Imports for the first seven months of the year are now 1.5% below the same period last year.

It could be argued that weather-related supply issues in top exporter Australia and coronavirus-related production impacts in number two exporter Brazil were behind some of the weakness in iron ore imports, but this was largely a first quarter story.

Rather it appears that official curbs on steel output are finally filtering through to demand for iron ore.

Given that China buys about 70% of global seaborne volumes, it's little surprise that the iron ore price has retreated sharply in recent weeks, shedding about 27% since a record high in May to end at $171.30 a tonne, according to assessments by commodity price reporting agency Argus.

Copper imports also fell for a fourth straight month, with China buying 424,280 tonnes of unwrought metal, down from June's 428,437 tonnes and only slightly more than half the record 762,211 tonnes from July last year.

The release of 50,000 tonnes from China's state reserves and a loss of some momentum in key manufacturing indexes are most likely behind the softer imports of the industrial metal.

Additionally a change in import rules to allow purchases of higher-grade scrap copper also likely weighed on imports of refined copper, and since this a structural change, it may continue to have an impact in coming months.

Coal was the exception to general softness in China's imports of major commodities, with shipments in July reaching a 7-month high of 30.18 million tonnes, from 28.39 million in June and 26.1 million in July 2020.

However, for the first seven months, coal imports are still down 15% from the same period in 2020, reflecting that the strength is a recent phenomenon and is related to a loss of domestic output amid mine closures for safety inspections.

With China now re-opening mines, and the summer power demand peak unlikely to last beyond August, the risk is that coal imports moderate in coming months.

Overall, the July trade data shows that China's commodity imports have moderated from the robust levels associated with last year's stimulus as part of Beijing's efforts to boost the economy in the wake of the pandemic.

It's likely that the rest of 2021 will see imports more around levels recorded in 2019, prior to the pandemic, rather than in the second half of 2020, when the stimulus was in full swing.

This means that they will remain solid, but won't be the engine that drove commodity prices sharply higher in the second half of last year and the first half of this year.