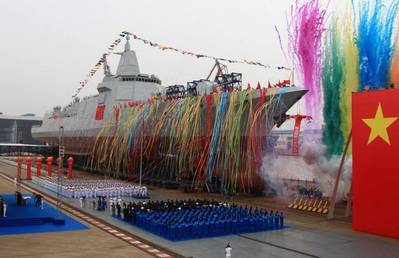 The Nanchang, China's first Type 055 guided missile destroyer, will soon be put into commission in the People's Liberation Army Navy, a spokesperson said.

China plans to have a fleet of 8 Type 055 destroyers, its most powerful naval vessel which was showcased during the People's Liberation Army (PLA) Navy’s 70th anniversary on Tuesday in Qingdao.

Long expected by Chinese military enthusiasts, the Nanchang, China's first Type 055 destroyer, which is painted with the hull number 101, was part of the destroyer group.

President Xi Jinping reviewed the major naval parade which further had the direct participation of nearly a dozen regional navies, including Japan, Australia, and the Philippines.

Global Times said that the revelation of the name and hull number indicates Nanchang is already combat-ready. The Type 055 destroyer will become a new icon to represent the PLA Navy's capabilities and could sail to the high seas.

The 10,000 tonne-class destroyer has already undergone construction and most of the sea trials, according to Ren Guoqiang, spokesperson with the Ministry of National Defense.