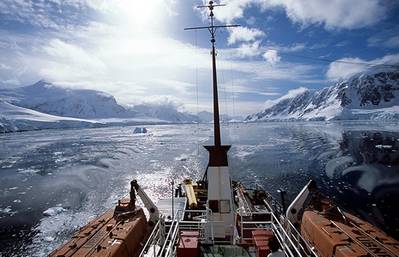 Seventy four people spent Christmas aboard the Russian cruise ship 'MV Akademik Shokalskiy' beset by ice in a remote region off the coast of Antarctica. The Australian Maritime Safety Authority (AMSA) is co-ordinating the search and rescue operation, and 3 ice-breaking vessels in the area are now en route, although all are at least two days sailing away.

The ship is in the Australian Search and Rescue region, 100 nautical miles east of the French base Dumont D’Urville, having been caught in the ice while on a cruise to the site of an historic  Antarctic expedition.

According to 'MercoPress', citing the travel agency concerned, 'Expeditions Online', The Russian-built ice-class vessel left the port of Bluff in New Zealand on 8, December 2013 to follow in the footsteps of the great Antarctic explorer and scientist Douglas Mawson.

Led by the climate scientist Chris Turney of the University of New South Wales, the ship has been sailing through the Southern Ocean, repeating and extending many of Mawson's wildlife and weather observations in order to build a picture of how this part of the world has changed in the past 100 years