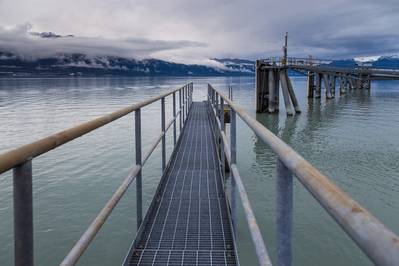 Clean-up crews were working to contain an oil spill at the Trans-Alaska Pipeline System's (TAPS) Valdez Marine Terminal, officials said on Wednesday, but the volume spilled was not preventing tankers from loading at the site.

A sump overflow spilled oil into the water at the terminal on Sunday night. By Wednesday, clean-up crews had recovered 574 barrels (24,108 gallons) of an oil-water mix, authorities said.

A team composed of system operator Alyeska Pipeline Service Co, the U.S. Coast Guard and the Alaska Department of Environmental Conservation is managing the response and cleanup, now in its third day.

The Valdez terminal is located in Prince William Sound, on the south coast of Alaska, at the terminus of the Trans-Alaska Pipeline System.

Workers have put booms on the water to try to stop the spread of an oil sheen, collecting oily snow and digging into the area where the spill originated, the unified command said in a statement.

Despite the spill, regular TAPS operations continue, the statement said. One tanker loaded with crude departed the Valdez terminal Wednesday morning and another had likely arrived by midday to start loading, said Alyeska spokeswoman Michelle Egan.

"We are working with the USCG and ADEC to make sure the loading area is sheen-free so that tankers can arrive and depart," Egan said in an email.