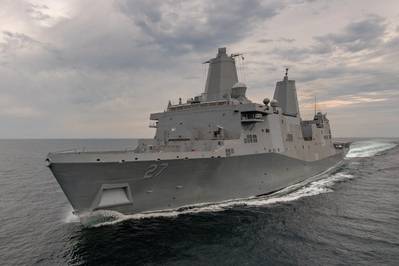 The U.S. Navy commission its newest amphibious transport dock ship during a ceremony Saturday, April 21, at the Port of Portland, Marine Terminal 2 in Portland, Ore.

Built by Ingalls Shipbuilding in Pascagoula, Miss., USS Portland (LPD 27) is the 11th ship in the San Antonio class designed to support embarking, transporting, and landing elements of more than 800 Marines with both a flight deck, which accommodates CH-53E Sea Stallion, and MV-22 Osprey tilt-rotor aircraft, and a well deck, which can launch and recover landing craft and amphibious vehicles.

"USS Portland enters service in a period of dynamic security challenges, and I am confident this ship and crew will conquer these and future challenges because of the strength and talent of the Sailors and Marines who will serve aboard this ship," said Secretary of the Navy Richard V. Spencer. "I am certain that USS Portland will proudly represent both the United States and the people of Portland in maritime operations around the world for decades to come."