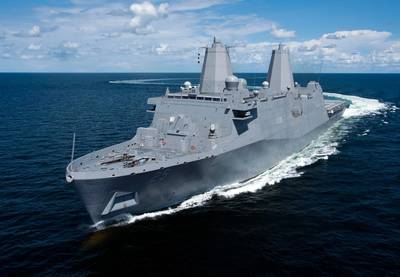 "We put Somerset through rigorous testing last week," said Mike Duthu, director of Ingalls' LPD Program. "We are extremely pleased with the fit and finish on the ship and how well she performed. LPD 25 proved her seaworthiness with strong performance in several different tests, including the ship's propulsion, steering, navigation, communications and weapons. The team did a great job getting LPD 25 to this point. We have already started preparations for Navy acceptance trials, and we have confidence that we'll be ready."

The ship will now prepare for acceptance sea trials to demonstrate the same tests and operational success to the U.S. Navy's Board of Inspection and Survey (INSURV). The ship is scheduled to be delivered to the Navy this year.

The 684-foot-long, 105-foot-wide ships are used to transport and land Marines, their equipment and supplies ashore via embarked air cushion or conventional landing craft and amphibious assault vehicles, augmented by helicopters or vertical takeoff and landing aircraft such as the Osprey. The ships will continue to support amphibious assault, special operations or expeditionary warfare and humanitarian missions throughout the first half of the century.

A new monohull landing craft will be one of two support craft on the U.K.'s polar research ship RRS Sir David Attenborough.