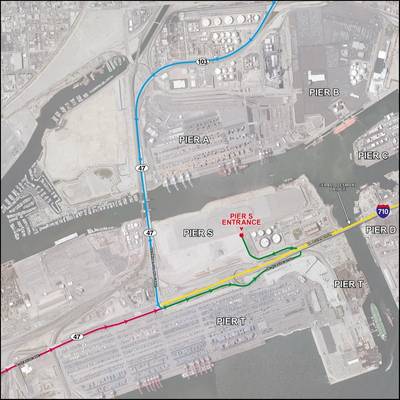 Port of Long Beach continues temporary off-dock storage on Pier S to speed cargo flow
To help Port of Long Beach terminals quickly work through a backlog of cargo, the Long Beach Board of Harbor Commissioners has unanimously approved an extra six months of operation for a temporary container storage facility on the harbor district’s undeveloped "Pier S."
The action temporarily extends the life of the existing 30-acre storage depot that opened in December 2014, and also allows for the storage of loaded cargo containers and chassis in addition to the empty containers already permitted there.
Conditions at the port have changed since the storage depot's opening. A tentative agreement has been reached on the dockworkers' contract, federal regulators granted permission for Long Beach and its neighbor the Port of Los Angeles to collaborate on congestion relief, and private chassis fleets in the region agreed to pool their resources. But terminals are in need of additional space as they try to eliminate a backlog of cargo that built up over months of congestion.
With the initial time period for the container storage depot set to expire March 31, the port acted to expand the use of the area at Pier S. Pasha Stevedoring & Terminals Inc. will continue to operate the storage depot, and the Port will monitor traffic for any issues.
Harbor Commission Vice President Rich Dines said, “I applaud my fellow Commissioners for supporting innovative solutions to congestion and accelerating goods movement in our port complex. With the vision and leadership of Chief Executive Jon Slangerup and his team, we continue to take bold steps to ensure the Port of Long Beach remains the premier seaport in North America.”