Containers Lost from Barge Near Hawaii 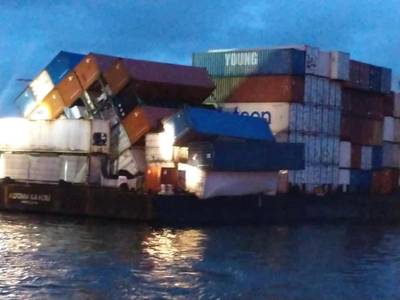 At least 21 containers were lost form a barge traveling from Honolulu to Hilo, Hawaii on Monday, the U.S. Coast Guard said.

Nine of the 40-foot containers lost from the Young Brothers barge Ho Omaka Hou have been located, while another 12 are still missing, according to the Coast Guard. The barge was being pulled by the tug Hoku Loa at the time of the incident. No injuries have been reported.

The operator reported the containers fell overboard from the 340-foot barge at 4:30 a.m. Monday. The crew reportedly noticed the boxes were missing after mooring in Hilo. Containers are said to be adrift as far as 8 miles north of Hilo, and one is adrift in Hilo Harbor.

Weather at the time the containers were lost was east winds at 12 miles per hour, waves to 4 feet with a south swell at 3 feet, and isolated showers.

The Coast Guard is investigating the incident and working with Young Brothers personnel to assess the situation further, including determining the contents of the lost containers. The Coast Guard is also searching by air to locate lost cargo.

Young Brothers is working with a salvage team to locate and recover as many containers as possible.

The Coast Guard issued a broadcast notice to mariners to alert nearby vessels to keep watch for any containers that may pose a hazard to navigation.

Hawaiian inter-island shipping company Young Brothers, a subsidiary of Saltchuk's Foss Maritime, has been operating a reduced schedule due to the coronavirus pandemic. Hawaii State Senator Kaiali‘i Kahele said on social media that the barge was loaded with more containers than usual due to the reduced number of sailings.