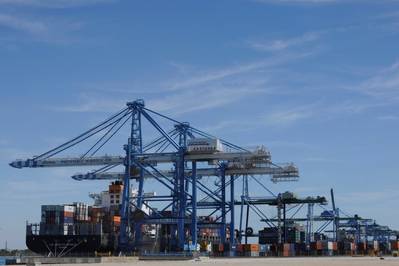 Container throughput at French port Marseilles Fos reached 876,711 teu for the period January to September, an increase of 6% on the first nine months last year.

The performance - driven by a 9% rise at the Fos 2XL deep sea terminals - was two points better than the trend at other French ports, the port authority said.

Container tonnage contributed 8.5 million metric tons to the general cargo total of 13.3MT, with the balance coming from 2.8MT of ro-ro traffic – down 7% - and just over 2MT in conventional trades (+2%).

Overall cargo throughput improved from a 6% drop to the end of June to finish the nine months 3% down on 58.8MT. The decrease of 1.9MT compared with last year was attributable to the continuing market changes in oil trades, which left liquid bulks 6% worse at 35.5MT.

The liquid bulks total included 32.6MT in oil and oil products. This was 7% down for the period but bettered the 13% first-half decline thanks to refined products rising 20% to 9.4MT. Crude imports for national refineries fell 13% to 16.7MT, crude for pipeline delivery to southern Europe was down 7% on 1.9MT, LNG slid 28% to 3.2MT and LPG lost 2% with 1.4MT. Elsewhere in the sector, liquid chemicals and agro-products rose 8% to 2.8MT.

Dry bulks edged up 1% to almost 10MT. Raw materials for the steel industry were stable on 7.1MT after slipping in September, but this was compensated the same month by increases of 35-54% in coal, lime and cereals volumes.

Passenger throughput fell 10% to 1.922 million despite cruise traffic continuing to soar. September alone saw 64 cruise calls – up from 51 calls in September 2013 – which boosted cruise numbers by 7% to 951,000 for the nine months. Ferry carryings fell 22% to 971,000, with 1.4% growth on North Africa services but a 32% drop in Corsica volumes following a summer dispute at operator SNCM.