Containers Will Be Removed to Refloat Containership Ever Forward 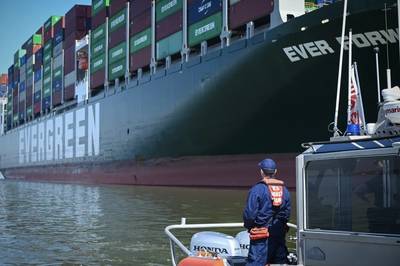 Salvors will remove cargo from the grounded containership Ever Forward as a means to lighten the vessel for another refloat attempt near the Port of Baltimore, the U.S. Coast Guard said on Monday.

The Hong Kong-registered containership has been stationary since March 13, when it ran aground outside of the Craighill Channel in the Chesapeake Bay. No injuries or pollution have been reported.

Dredgers have been digging out around the stuck box ship, and last week groups of tugboats were twice unsuccessful in trying to dislodge the 1,095-foot vessel from the mud.

Under new plans announced by the Coast Guard, crane barges will be used to remove a portion of the containers from the stricken vessel to reduce its ground force ahead of the next refloat attempt. Lifting operations will commence as soon as cranes with suitable lift heights can be installed. Meanwhile, dredgers will continue to dig out around the ship to a depth of 43 feet.

"Salvage experts determined they would not be able to overcome the ground force of the Ever Forward in its current loaded condition. The new strategy offers the best chance of successfully refloating the Ever Forward." the Coast guard said.

Boxes will be removed from both the port and starboard sides of the 12,000 TEU Ever Forward and placed on barges to be shuttled back to and offloaded at their original onboarding facility, Seagrit Marine Terminal in Baltimore. The vessel is carrying 4,964 containers of general dry goods, according to the Coast Guard, who said lifting work will only take place during daylight hours for safety reasons.

Once the desired number of containers are removed, another refloat attempt will occur using tugs and pull barges.

The Coast guard said it expects the entire operation to last about two weeks, though the timeline could be impacted by weather conditions and other variables.

The Coast Guard said the response team continues to monitor the vessel for signs of pollution. "In addition to regular soundings of fuel and ballast tanks, a naval architect and salvage master are remotely monitoring a recently installed sensor system to constantly evaluate the ship’s stability and integrity and will continue to do so throughout the refloat operation," the agency said. "They will also continue to conduct regular visits to the ship."

A 500-yard safety zone around the ship will continue for the duration of the operation, and the adjacent shipping channel will remain unaffected, the Coast Guard said.