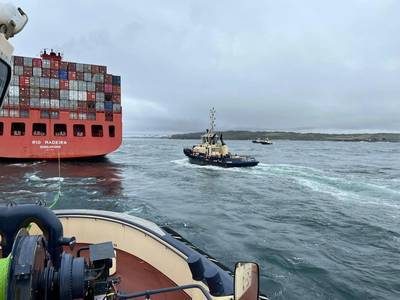 A Singaporean-flagged containership went adrift after suffering a power failure before midnight on October 20 off Australia's New South Wales coast.

The Australian Maritime Safety Authority (AMSA) said it tasked the specialized emergency towing vessel ETV Svitzer Glenrock from Newcastle to provide towing assistance to the disabled box ship Rio Madeira, which was en route from Singapore with 27 crewmembers on board.

The Svitzer Glenrock arrived at the location of the stricken containership about 75 kilometers south of Narooma at 3 p.m. local time on Saturday afternoon.

Prior to a tow connection the Rio Madeira advised they had restored propulsion and were able to proceed under its own power.

The ETV Svitzer Glenrock stood by and escorted the vessel until it berthed at Port Botany on Sunday afternoon.

Crew fatigue led to an offshore supply vessel striking an oil and gas production platform in the Gulf of Mexico in 2021,…

A harbor tug has run aground after colliding with an oil tanker near Corpus Christi, Texas.The U.S. Coast Guard said its…