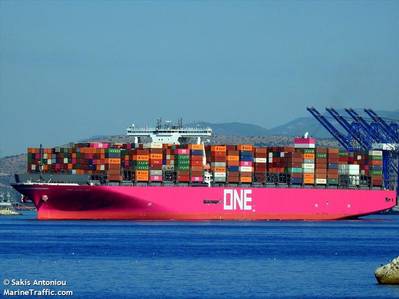 Japanese carrier Ocean Network Express (ONE) confirmed reports that its chartered containership ONE Blue Jay came into contact with a chemical tanker near Port of Perama, Piraeus, Greece, at around 2 p.m. local time on Thursday.

"There are no reports of pollution from ONE Blue Jay, and we can confirm our crew are safe," ONE said in a statement. Local authorities said there were 23 crew on board the containership at the time of the incident.

The Japanese flagged vessel is currently berthed at the Port of Permana while investigations are ongoing, ONE said.

According to authorities, the tanker, Turkish-flagged Gunece, has suffered a crack in one of its ballast tanks and is listing slightly. One of the 16 crew members on board has reportedly suffered a lower body injury, authorities said.