Containerships with a collective cargo carrying capacity of 5.3 million 20-foot equivalent units (TEU) are now fitted with an exhaust gas cleaning system (scrubber) to remove sulphur oxides (SOx) from the exhaust gasses generated by the combustion processes in marine engines and thereby comply with the IMO 2020 global sulphur regulation which came into force on January 1, 2020.

By the start of July, the share of the containership fleet with scrubbers installed exceeded that of the crude oil tanker fleet. At that time, the container shipping sector became the most scrubber-fitted among the main cargo carrying ship types.

“In order to cut the sulphur oxides emission, shipowners who can afford to buy a scrubber have done so to a substantial extent, with investments predominantly directed towards high consumption ship types,” says Peter Sand, BIMCO’s Chief Shipping Analyst and continues:

“Choosing the scrubber option to comply with the sulphur regulation was heavily debated as January 1, 2020 approached. But even with the low bunker fuel price spread between high and very-low sulphur fuels in the current market, it is safe to say that the investments are economically sound.

“However, the payback period on the investment is obviously extended at a price spread of $67 per MT, compared to an expectedly normalized price spread in the range of $100-$200 per MT,” Sand says. 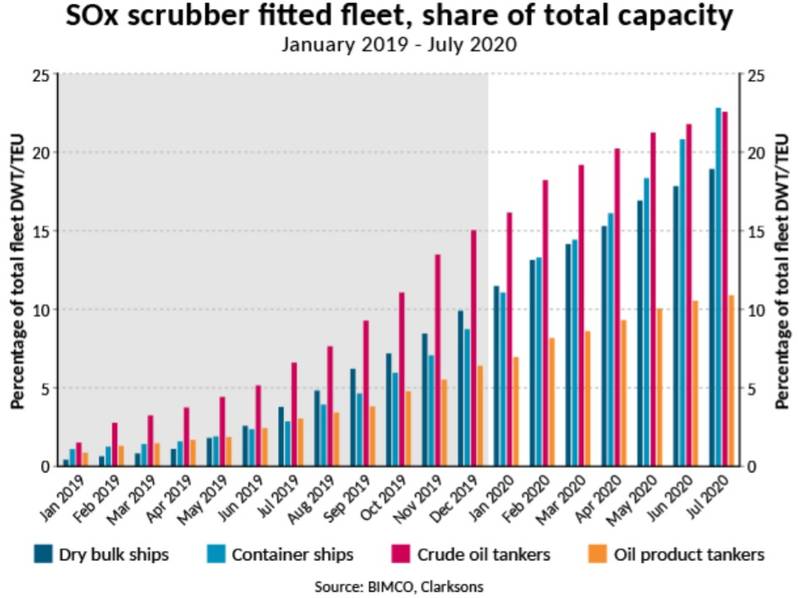 While the scrubber-fitted fleet of main cargo carrying ship types now counts 2,600 ships, most of the fleet—20,000 ships—are without a scrubber.

Size increasingly important
The bigger the ship, the more fuel it consumes. This explains why the uptake of SOx scrubbers is more popular for VLCCs, Capesizes and Ultra large containerships, than for their much smaller peers such as Aframax, Handymax/Handysize and feeders.

Adding ongoing and pending scrubber retrofits to those that will be on board newbuilds brings the total scrubber capacity count to 8 million TEU for containerships (31.6%), 141 million DWT for crude oil tankers (30.9%) and 226 million DWT of dry bulker capacity (23.5%) once all is installed.

Most time consuming to retrofit a containership
At any time since the start of 2019, yards have mostly been retrofitting dry bulkers and containerships, whereas crude oil tankers have seen the lion’s share of scrubber installations occur on board newbuildings.

Bunker price spread peaked at $353 per MT on New Years’ Eve
The bunker price spread is currently just $67 per MT if the fuel is purchased in Singapore, the world’s largest bunkering port. Local market conditions mean that the comparable spread in other significant bunkering hubs, like Rotterdam and Fujairah, is $46 and $74 per MT respectively as per August 11, 2020. 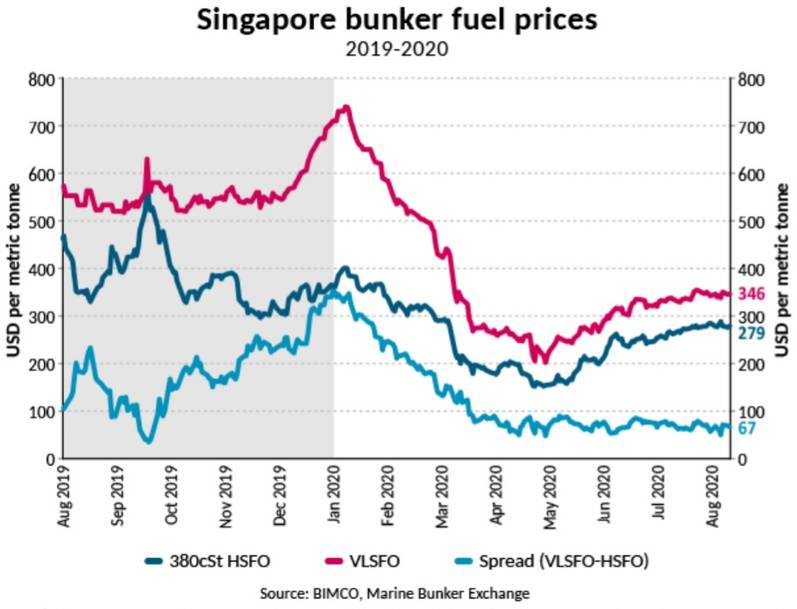 Uncertainty evaporated fast
Choosing to comply to the new sulphur regulation without a scrubber installed requires a ship to run on a low-sulphur fuel oil. Since January 1, 2020, the global refinery industry has supplied the shipping sector with mainly low-sulphur fuel oil, with the more expensive distillate, marine gas oil, a distant second.

For the first six months of 2020, the share of total Singapore fuel sales amounted to 18% for heavy-sulphur fuel oil, 71% for low-sulphur fuel oil and 11% for marine gasoil.

“The debate on scrubber economics is all but gone now, as 2020 is in full swing and focus has turned towards COVID-19, and how that impacts the business. What remains are the economic realities and technical obstacles the industry is dealing with daily,” Sand says. “Cost savings are essential to all, but despite a considerable share of the fleets now being scrubber-fitted, the largest part of the fleet continues to operate without.”