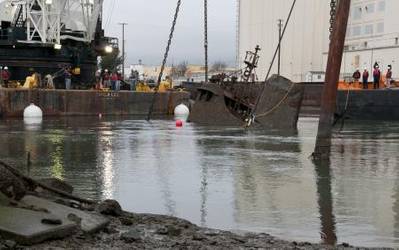 The tug Respect is hauled to the surface of the Oakland Estuary Wednesday, Dec. 18, 2013. The tug, which sank at its moorings in 2007, will be transported to a nearby yard for scrapping. Coast Guard photo by Thomas McKenzie

Members of the U.S. Coast Guard Sector San Francisco Incident Management Division were notified by the Environmental Protection Agency's (EPA) on-scene coordinator that their contractor, Global Diving and Salvage, Inc. (GDSI), had discovered tar balls and heavy oil while removing sediment from the tug Respect in the Oakland Estuary Oct. 14, 2013.

Further research on the Respect showed an estimated 300-500 gallons of oil had been left aboard during removal operations conducted in 1998. The Respect was then vandalized in 2007 and sank with an unknown oil potential. Based on the information at hand and the unknown amount of oil, it was determined by the Federal On-Scene Coordinator that Respect posed a substantial threat to the environment.

The Oil Spill Liability Trust Fund was utilized to contain and remove all oily product aboard the tug in order to mitigate impact to the public health and welfare.

"This case underscores two facts," said Coast Guard Capt. Greg Stump, commanding officer of Sector San Francisco and Captain of the Port of San Francisco. "The first is prevention is less costly compared to response; once the vessel sank, required funding to resolve the issue rose exponentially. Second, partnerships are invaluable -- federal, state, and local entities were required to effectively and properly dispose of the vessel."

Oil was thought to be in the lower holds of the Respect, which could only be safely accessed by raising it. Removal operations commenced Dec. 2, 2013, with GDSI as the contractor. GDSI, Sector San Francisco, Marine Safety Center Salvage and Engineering Response Team (SERT), and a Navy dive team determined that two cranes would be needed to safely "par buckle" and raise the Respect, based on the vessel's dimensions. The DB General -- the largest crane barge on the West Coast -- and the crane barge Paula Lee were contracted for lifting operations.

After the successful lifting operation, Respect was then safely transported to nearby Bay Ship and Yacht, where Sector San Francisco, along with the EPA and CalRecycle, coordinated the removal of oil-laden mud, asbestos, and hazardous substances, totaling in the removal of 31,000 gallons of oil-laden materials and 40 cubic yards of asbestos.

Responsibility for the Respect was then passed to CalRecyle who towed it to the U.S. Army Corps. of Engineers facility for final demolition.