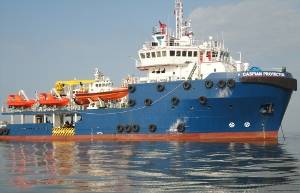 Topaz Energy and Marine recently took delivery of the newest addition to its fleet, the Caspian Protector. The vessel will be deployed in Azerbaijan in support of a 10 year $225m BP contract won in 2008.

The Caspian Protector is a state-of-the-art 200-ft vessel designed for emergency recovery and response (ERRV), standby duties and fire fighting operations. It is the first vessel in the Caspian region to be equipped with three daughter craft and two fast rescue craft. The vessel is equipped with Dynamic Positioning capabilities (DP1) and will assist in the safekeeping of workers on various oil production platforms in the Azeri sector of the Caspian Sea.

The importance of ERRV’s in oilfield safety services was demonstrated by Topaz in 2008 when another ERRV in Topaz’s Azeri fleet, the Baki, was put to the test. A gas leak at one of the Azeri platforms prompted a rig evacuation of 211 personnel, one of the largest offshore evacuations worldwide. The evacuation was safely executed by the Baki crew in less than two hours and resulted in BP awarding the Captain and crew the BP President’s Award.

Global supermajor BP is the operator of the Azerbaijan International Oil Company (AIOC) and is one of Topaz’s largest clients worldwide. Topaz has been awarded consistent contract extensions with BP. In late 2008, Topaz won a 10 year BP contract for the supply of three offshore support vessels (OSV) to support BP’s Azerbaijan operations. In addition to the Caspian Protector the other vessels deployed against the contract are the platform supply vessel the Caspian Server which is already in service, and the anchor handling tug supply vessel the Caspian Power, due for delivery later this year.

The financing for the Caspian Protector is provided by DVB Bank of Germany as part of a $84m term loan facility including three other vessels on time-charter to BP. DVB Bank is a leading specialist in international transport finance.

The vessel was built by Malaysian shipyard Berjaya, and is presently being mobilized from Malaysia via the Volga-Don canal to Baku in Azerbaijan.

Topaz Marine, the OSV owning and operating division of Topaz operates a fleet of 100+ vessels and is one of the top ten OSV companies in the world. The Topaz Marine fleet comprises AHTS’s, PSV’s, DP2 cable laying vessels, ERRV’s, Workboats, Flotels, Ice Breakers, Survey Vessels and a variety of specialized barges.

In 2009, Topaz achieved record results for the ninth consecutive year and posted revenue of $448m, EBITDA of $127m and net profit of $65m demonstrating year on year growth of 7%, 14% and 38% respectively.