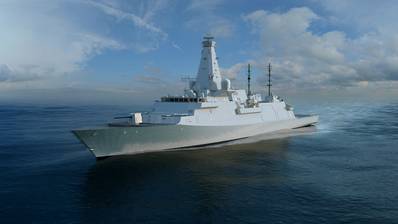 British defence company BAE Systems has won a 472 million pound ($671 million) contract from the UK government to continue with work to prepare for the building of eight anti-submarine warships.
Britain confirmed in its defence spending plan last November that it would buy eight of the Type 26 Global Combat Ships, down from the 13 ships that BAE had originally been expecting.
BAE said on Tuesday the 15 month contract would fund further detailed design of the complex vessels and the manufacturing of key equipment for the first three ships.
The deal follows a 859 million pound contract BAE won in February 2015 to continue design work on the Type 26.
($1 = 0.7039 pounds)