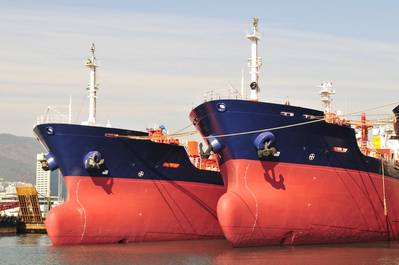 The coronavirus outbreak has affected all aspects of the shipping industry, lowering, if not wiping out, demand growth prospects for the year across all segments. The outbreak has also affected fleet development, says shipping association BIMCO.

Contracting activity has fallen, demolition activity, which had been high, is now being limited by restrictions around the world and deliveries of new vessels are delayed.

“The coronavirus has certainty replaced the IMO 2020 sulphur regulation as the talking point of the year. The demand outlook has weakened and uncertainty has increased across the board. This combination is reflected in fleet developments this year. A weaker outlook results in less contracting and more demolition, although this too has been affected by the coronavirus due to restrictions around the world."

"With little clarity as to when the rest of the world will be able to follow China into the next phase, the full effects of the virus on shipping remain to be seen,” says Peter Sand, BIMCO’s Chief Shipping Analyst.

Mounting uncertainty and pool outlook lowers contracting activity
Contracting was already down before the coronavirus outbreak, a trend that has only worsened as the outbreak has spread, first in China and now in the rest of the world. In the first quarter of the year, contracting activity dropped 55% from the first quarter of 2019, with only 6.6 million deadweight tonnes (DWT) ordered across the three major shipping segments, down from 14.7 million DWT last year. 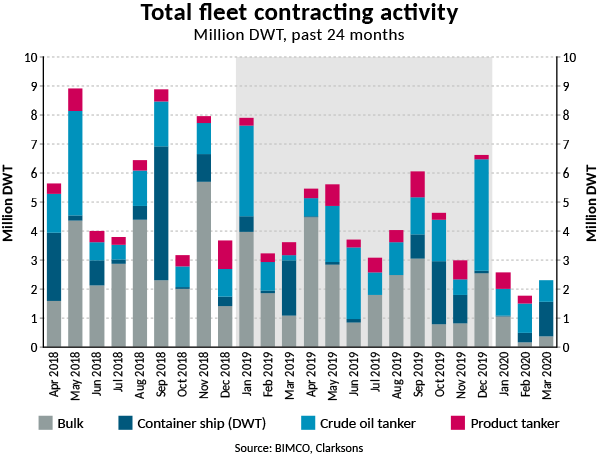 “Uncertainty about future environmental regulations, as well as lower demand growth outlook in the coming years, already had many think twice before ordering a new ship. The very sharp decrease in market sentiment and global shipping demand has only lowered contracting activity further,” Sand says.

Contracting falls in all major shipping segments
The product tanker segment has seen the smallest fall in new orders placed in the first quarter of this year compared to last, with orders down 17.8% to 806,500 DWT. On the crude oil tanker side, contracting activity has halved from the first two months in 2019 (-53%) with new orders totaling 2 million DWT. Three very large crude carrier (VLCC) orders have been recorded, with the remaining new orders being for Suezmax and Aframax ships.

There were very few orders for new container ships in the first two months of the year, totaling only 48,519 TEU. This was dwarfed by an order for five 23,000 TEU ships in March, adding to an already large orderbook for Ultra Large Container Ships (ULCS) (≥14,500 TEU). With the latest orders, there are now 76 ULCS totaling 1.5 million TEU set to enter the market between now and 2023, including 39 ships of 23,000 TEU or more.

The impact of the coronavirus on the shipping industry means that many more owners may now be looking to have their ships demolished. However, with restrictions aimed at containing the virus spreading further around the world, finding demolition availability is becoming increasingly challenging.

All three of the major demolishing countries in the Indian sub-continent, namely Bangladesh, India and Pakistan, have announced the closure of their yards, and ships heading toward them will be denied entry. This will halt all scheduled activity for at least the next few weeks.

“As demolition yards now close their doors, many owners of container and dry bulk ships will be left with unwanted tonnage in an already difficult situation."

"As long as freight rates hold up for tankers, owners will be less likely to scrap their ships, but even in this market, demand has evaporated and the current high freight rates are not sustainable,” says Sand. 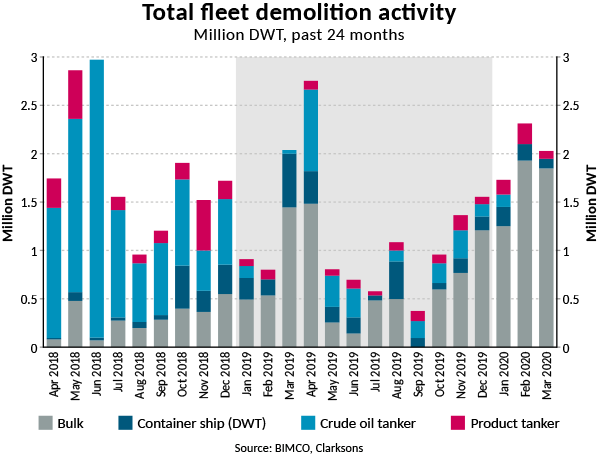 The dry bulk segment has driven most of the demolition activity, with 5 million DWT of capacity removed from the market in the first quarter of 2020, of which 4.1 million DWT came from 21 Capesizes.

The increase in demolition materialized despite a significant decline in scrap prices in the major demolishing nations since last year. In Bangladesh, a tanker could expect $440 per LDT in March 2019. That rate has fallen to $350 per LDT.

“Ultimately, the scrap value of the ship is not the driving factor behind the demolition decision. Instead, shipowners look to the prevailing market conditions and earning prospects of the ship,” says Sand.

Chinese shipyards are delayed by six weeks on average
One of the short term and direct impacts of the coronavirus on the shipping fleet are the delays of newbuilt ships in China and across the Far East. In February, there was only 398,712 DWT delivered by Chinese yards, a quarter of what was delivered in February 2019. Deliveries in March this year were half of those seen in March 2019. Currently, Chinese shipyards are delayed by between four to eight weeks. 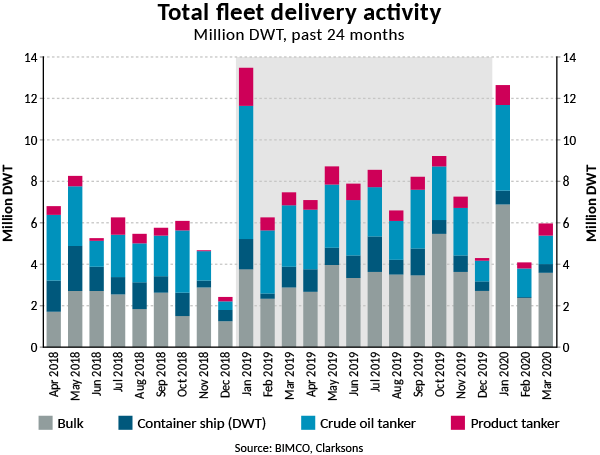 Deliveries of dry bulk vessels accounted for 60% of the total 21.5 million DWT delivered in the first quarter the year.

Both segments of the tanker shipping industries have seen deliveries fall by just under half compared to the first quarter of 2019; -49% and -43% for crude oil and product tankers respectively. A total of 5.7 million DWT of crude oil tankers was delivered in the first quarter of the year, of which 4 million comes from the delivery of 13 VLCCs.

In the container shipping market, one ULCS has been delivered as well as three neo-panamax, while 14 feeder vessels between 1,162 and 2,806 TEU made up the rest of deliveries. In total deliveries were down 58.6% to 102,435 TEU combined, compared with the first quarter of last year.