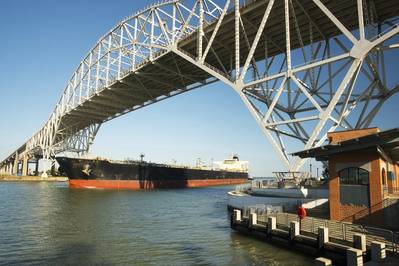 U.S. crude exports from Corpus Christi, Texas, have surged to a record in recent weeks, often surpassing hubs such as Houston and Beaumont, Texas, thanks to faster-than-expected infrastructure additions.

The infrastructure boom at Corpus Christi helped push crude exports there to a weekly record of 1.59 million barrels per day (bpd) in late December, more than doubling levels that held for the first eight months of last year, and above Houston's 2019 peak of 1.36 million bpd, according to vessel-tracking firm ClipperData.

The heavy flows suggest that fears of a bottleneck that would impede U.S. exports have not materialized.

"Those (export) numbers are truly astonishing, and at times, Corpus volumes have accounted for more than half of all crude exports moving out of the U.S. on a weekly basis," said John Zanner, senior strategist at Uplift Energy Strategy.

The four-week average of overall U.S. crude exports reached a record 3.72 million barrels per day (bpd) in the week ended Dec. 27, according to the U.S. Energy Information Administration.

Analysts had expected a crude bottleneck in the Permian Basin to shift to the Gulf Coast as three new pipelines opened last year. New flows out of the nation's biggest oil field were expected to overwhelm export capacity in Corpus Christi and weigh on regional prices.

But the rush of crude has been absorbed following last year's addition of almost 2 million bpd of inbound pipeline capacity and 5 million barrels of storage capacity in Corpus Christi, according to market intelligence provider Genscape.

Analysts expect flows to rise further as three new pipelines from the Permian Basin to the U.S. Gulf Coast begin full service in the first half of 2020. The lines are owned by EPIC Midstream, Plains All American Pipeline LP and Phillips 66 Partners LP.

Another 18 million barrels of storage capacity were under construction in the Corpus Christi area in the week to Jan. 3.

Oil and shipping group Monjasa said it has acquired the 9,600-dwt oil and chemical tanker Monjasa Server from Golden-Agri Stena.