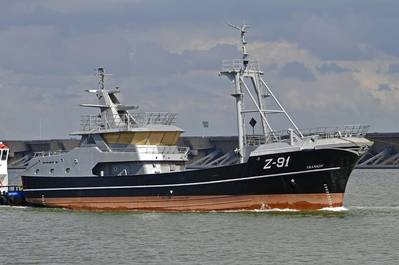 Damen Maaskant Shipyards Stellendam reached a milestone in its construction of a 38-m trawler for Belgium-based Rederij Long Ships, with the hull  launched into the water in Poland and transported to Stellendam for further outfitting.

Rederij Long Ships owner Eddie Cattoor said, “I expect a lot from Franson. First and foremost to bring in food from the wide seas. Food that will supply a growing world population. She will also play an economically important role, contributing to the Flemish economy and employment in the ports and fish trade and especially in creating a livelihood for our Flemish fishermen.

“They will experience job satisfaction in the Franson, which is a safe, efficient and ergonomic ship. A ship that meets all modern and contemporary requirements and that will be further completed with the best accommodation for the crew, who have to work hard for many days at sea.”

Franson is a new design, the BT3808. She features the maximum tonnage and length permitted by the Belgian Maritime Inspectorate. Maaskant have modified the vessel in order to realise a 12% increase in bollard pull during trawling.

Rederij Long Ships was founded in 1934 by the current owner’s grandfather. This latest addition to the company’s fleet will replace the vessel Z90 Francine. It will be used to fish year round in the waters of the North Sea and the Skagerak and, in the summer, the Bay of Biscay.