Decarbonisation a Major Issue in Shipping 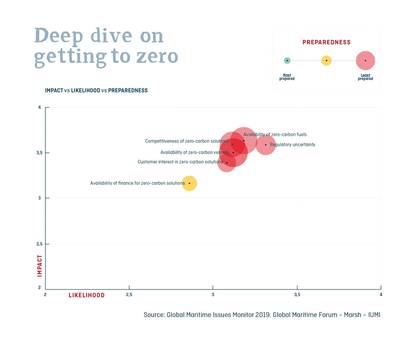 Survey respondents from 46 different countries around the world highlight ‘decarbonization of shipping’, ‘new environmental regulation’, ‘societal demands for sustainability’, and ‘failure of climate-change mitigation and adoption’ as four of the top 10 issues in terms of potential impact on the maritime industry.

The Global Maritime Issues Monitor 2019, which surveyed respondents from 46 countries, ranked only the “global economic crisis” ahead of “decarbonisation of shipping” as the issue to have the greatest impact on the industry over the next decade.

Senior leaders foresee environmental and climate related issues to have a major impact on the maritime industry in the coming decade.

“Important environmental initiatives are underway within the maritime sector and the pending 2020 sulphur regulation appears to be on senior leaders’ radar. They see new environmental regulation as most likely to occur in the next ten years and deem the issue to have the third highest impact. Worryingly, they perceive the maritime industry as relatively unprepared for the issue close to the deadline for the new fuel requirements,” says Peter Stokes, Chair of the Global Maritime Forum.

Stokes added: “When it comes to decarbonization, the maritime sector must play an even larger role in addressing climate change and the sector is a key stakeholder when it comes to both the causes and solutions related to the issue,” says Peter Stokes, Chair of the Global Maritime Forum."

Environmental, economic, geopolitical, and digital areas attract attention when top issues regarding likelihood, impact and preparedness are compared. For the second consecutive year, a potential ‘global economic crisis’ is tapped as the issue to have the greatest impact over the next ten years. It is also the one issue the industry is least prepared for, although it considers the event relatively unlikely. Likewise, ‘cyber-attacks and data theft’ remain a top concern for the industry.

Senior leaders perceive the maritime industry relatively unprepared to deal with all 18 issues surveyed. More worryingly, seven of 10 issues considered to have the biggest impact are among those for which respondents consider the industry to be least prepared.